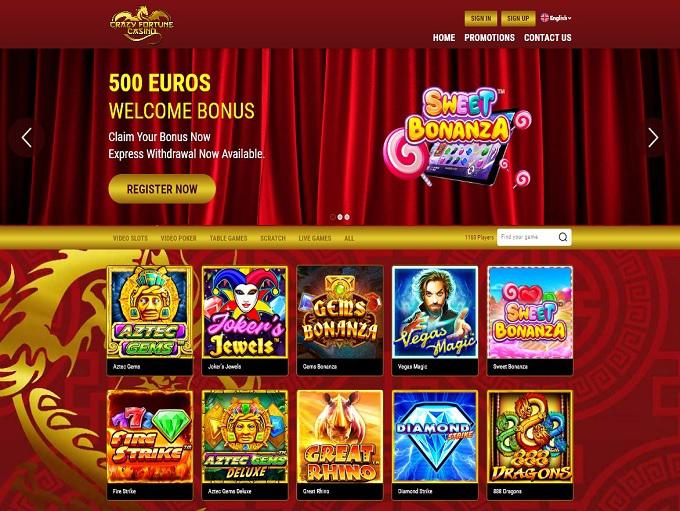 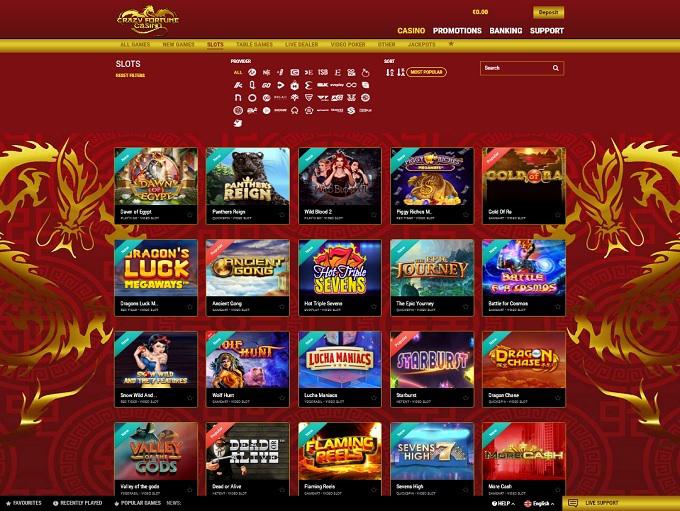 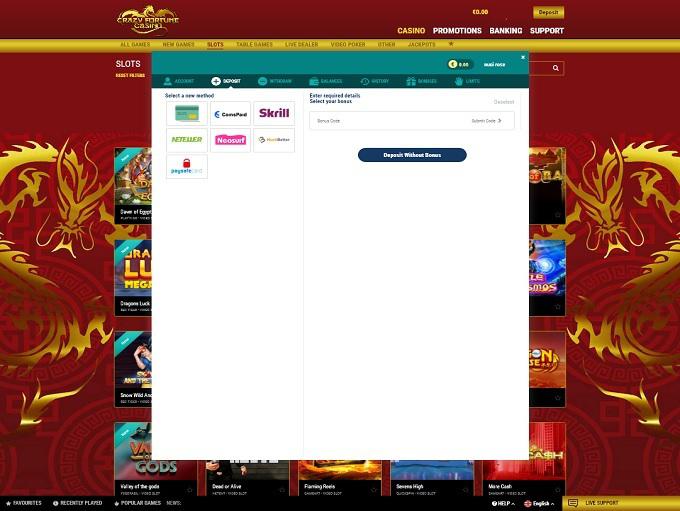 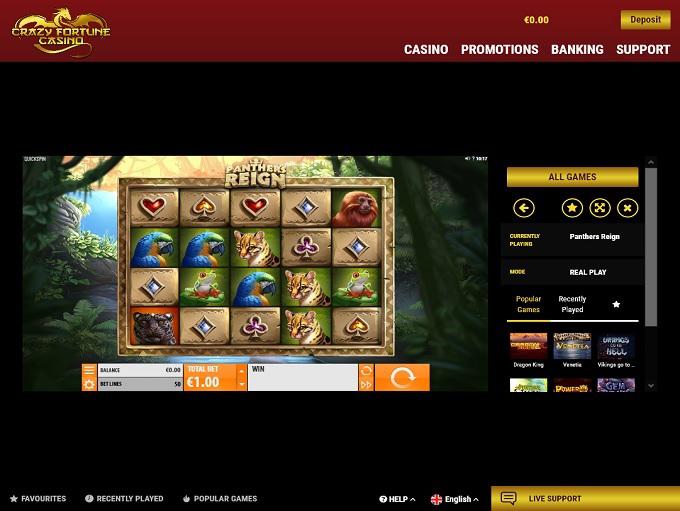 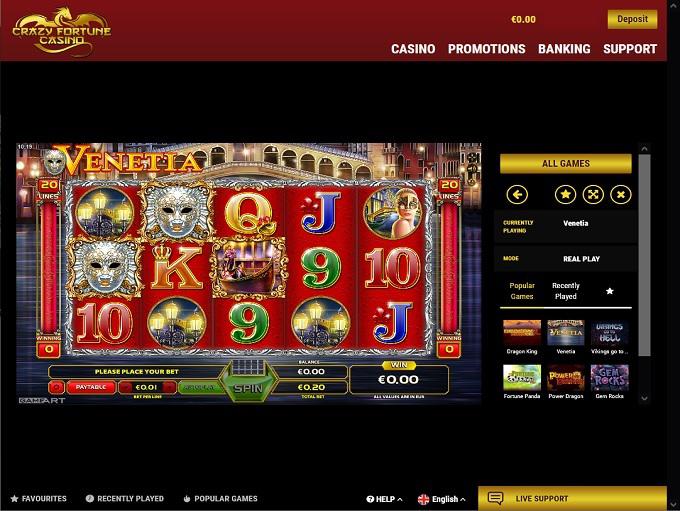 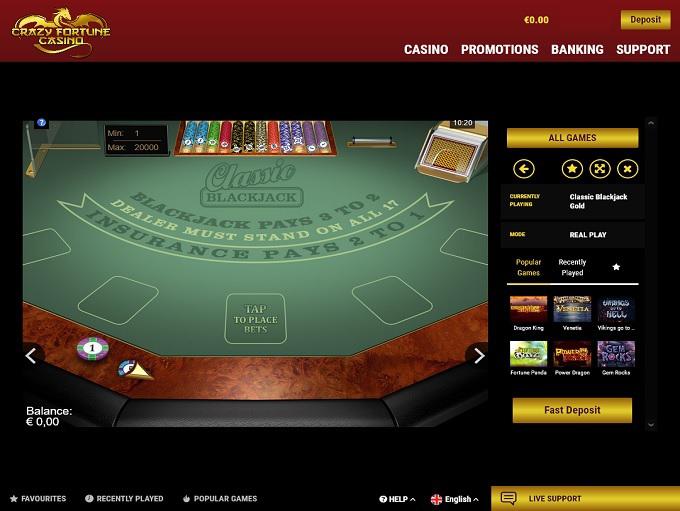 Crazy Fortune Casino has been running since they first entered the market in late 2017. Their license comes from the Curacao, which is a decent but not absolute top-tier jurisdiction. Their home page and lobby are set up to have a sort of modern theme with some degree of Asian influences. Flavidus Limited is the company running the show here, and they operate a number of other brands that have good reputations.

Microgaming Quickfire has provided the main software for this casino. Their platform includes games from companies like Play N Go, Endorphina, IGT, Rabcat and plenty of others to give players a lot to choose from. Added to the mix here are titles from Net Entertainment and BetSoft, each of which is known for putting out high-quality content for players and for always having new releases come out on a regular basis. Since there are over a couple dozen different companies that have games for this platform, it goes without saying that there's a ton of variety.

As far as how players can get connected to play, there's a whole lot of flexibility. Desktop players can use just about any operating system like Windows, Linux or Mac to play through their Internet browser window. Mobile players can also use their browser app to sign in straight from the website, which makes it really easy to get started without having to download anything. Blackberry, iOS and Android devices, no matter if they're tablets or smartphones, can access this mobile option. In short, you'll have as many ways to connect and play here as you'll find anywhere else, and that's an important point for players who want to get in on the action while they're out and about.

One of the biggest advantages of playing at a site like Crazy Fortune Casino that has software from so many companies is that you generally get a much larger selection of games, and that's definitely the case in the slots section. Several hundred titles are found in this particular genre, and that includes some three-reel classic games along with the majority of five-reel (and more) video slots. The progressives are represented here as well with many games that pay out jackpots on one single spin that will give you six-figure, seven-figure or sometimes eight-figure wins. This is plenty to get excited about considering there's a life-changing sum of money to be won at all times on these particular titles.

The mix of different companies having games here also lends itself to a pretty good set of table games available. High-end options for roulette, Baccarat, craps and casino poker titles make up what most people will see when they look for these types of games. Make sure you don't miss the fact that they have over a dozen types of video poker and blackjack each, which is something players who prefer a bit of strategy will care more about instead.

MasterCard, Visa, Paysafecard, Skrill, Neteller, Giropay, Dotpay, iDEAL, Trustly, bank transfers and a bunch of other options are available for payments. This site doesn't have much of a history under its belt, and the Curacao license doesn't inspire a ton of confidence either. With that having been said, the operator Flavidus Limited has a number of sister sites to this casino that have built up reputations for being pretty reliable with cash outs, but unfortunately, that's not the whole story.

There's a maximum withdrawal amount of €2,000 each week or €5,000 each month, which is very much on the low side. This is a major disadvantage for the vast majority of players, and it's enough of a problem, combined with the weak license and lack of history, for us to suggest that players think twice before playing here.

Live chat is the main way to contact the support team, and it's up 24/7/365. Email and telephone options can also be used, and they have a ticket-based support system that makes it easy to check up on the status of any questions or feedback you have through their website. The customer service for this site and the other sites operated by the same company is plenty sufficient for virtually everyone.

With Crazy Fortune Casino, you've got a casino with some pluses and some minuses. They're operated by a company with a good reputation, but they have a weak license and not much of a history of their own. They have a lot of great games from top-tier software companies to pick from, but their maximum withdrawal amounts are very much on the small side. In today's online casino industry, players don't need to settle on these issues because there are so many great sites to pick from. Along these lines, we think players should check out other options before committing to playing here.