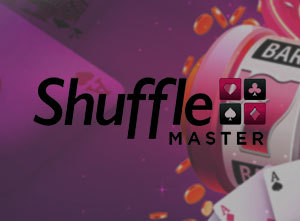 Established in 1983, Shuffle Master has been in the industry long enough to be a well-recognized brand globe wide. Located in Paradise (Nevada), the company is widely known as a manufacturer of various other casino products, including table games, as well as slot machines.

In the company’s rich history, the two most crucial years were 2012 and 2013. The former brought name change while the latter was marked with a milestone partnership with one of the oldest brands in the gaming industry.

But what is Shuffle Master most popular for?

As easily assumed from the name, it’s largely acknowledged as the king in the card shuffling business, which is why it caught the attention of numerous bigger corporations.

At the time being, the manufacturer has a reputation of a virtual monopolist in the card shuffler business. Moreover, at least five years in a row, Forbes named it one of the 200 Best Small Companies in America.

Find out more about the company’s history and products!

The company was founded by John Breeding, a former truck driver. It was a news article about card counting in BJ that inspired him to borrow the money and develop a mechanical shuffler.

How did his machine work?

By nullifying the advantage of card counting, without losing valuable playing time, the device allowed every hand to be dealt with from a fresh deck.

…when the shuffler came to market, but the initial public offering was made later that year. However, since land-based establishments were increasingly using multiple decks for blackjack, this significantly limited the sales potential of the company’s single-deck shuffler.

Looking for ways to boost demand for the device, Breeding developed a new single-deck game, Let It Ride. By 1995, the game was generating more revenue for the company than the shuffler.

This defined further course of actions, directing the company’s business plans in the development of a wider assortment of products.

As the company’s popularity grew, it became more and more attractive business associate for various brands industry and globe-wide.

…the manufacturer agreed to purchase Ongame Network, a provider of services to online poker sites. The ON was bought from bwin.party Services for $26 to 39 million. However, Shuffle changed its mind months later. As explained, the main reason was declining market conditions in Europe as well as uncertainty about the introduction of online poker in the US.

The very same year brought another crucial decision for the manufacturer, as the company rebranded to SHFL entertainment. This happened in October 2012, and the motivation for this step was the team’s desire to come up with a name that would best reflect the diversity of its product offerings.

During the same month…

…the company debuted Mulligan Poker, a game developed by Michael Shackleford and currently only offered online by casinos using IGT software. Introduced at the Global Gaming Expo conference, the product was set to appear in terrestrial establishments in Kansas early in 2013.

July 2013 was one more turning point for the company…

…as Bally Technologies agreed to acquire SHFL for about $1.3 billion. The acquisition was completed on November 25, 2013, bringing both companies a better position for future progress.

The partnership was seen as mutually beneficial since both sides “share a common vision to build the industry's leading supplier based on delivering superior products, solutions, and services to customers around the world."

…as the Scientific Games acquired Bally Technologies. To date, there are four companies operating under this massive umbrella- alongside Bally, there are SG, WMS and, naturally Shuffle Master.

It may not be the name often pronounced, but this manufacturer is considered a quiet leader in the sphere of table games.

The wealthy palette of products…

…comprises not only a fine assortment of proprietary table games but utility innovations, electronic gaming systems, progressive side bets, various bonusing options and much more.

Following the immense success of Let It Ride, the company was willing to explore a completely new field- slot games. The late 1990s brought several licensed games inspired by The Honeymooners, Let’s Make a Deal and Press Your Luck.

…this wasn’t as profitable as expected, so it was sold to IGT for $1.6 million in 2004. Wanting to give this niche one more chance, Shuffle bought Australian developer Stargames Limited in 2006.

So, what can players find in SHFL’s portfolio?

For the sake of a more convenient organization, the complete catalog can be divided into three different sections, table games, electronic tables and shufflers plus utilities.

So far, the company has confirmed multiple times that it is capable of developing titles that meet various players’ demands and skill levels. To make sure there’s a high level of dynamism inside the game, accompanied by versatility options for bonuses as well as progressive side bets.

The offering encompasses side bets in Baccarat, BJ, and Craps, as well as variants of Pai Gow and Blackjack. In addition to this, there are several specialty games that are labeled as “player favorites”.

Thanks to a great combo of the gameplay of traditional table games with the latest technology, these tables create an enhanced gaming experience that maximizes the performance. Being cost-effective and secure, they are designed to cater to the needs of the diversity of punters.

Among the featured, there are Fusion, iTable and Quartz, each of them equipped with a unique set of possibilities.

Being the company’s starting point, this field gathers a plethora of useful tools such as Chippers, Continuous, Single and Multi-Deck Shufflers, Intelligent Shoes, Scoreboards as well as specialty products.

All of them are done in the latest technology, which ensures minimal fuss and the best quality performance and a huge level of security.