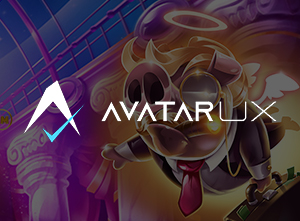 Announcing its presence in 2018, AvatarUX Studios joined the industry eager to offer premium content that ensures unrivaled online player attraction and retention. Officially launched during SiGMA 2019, the supplier quickly captured the attention with its cinematic games and powerful features.

One of the strongest proofs that their quality is recognized from the very beginning is a strategic partnership with a gaming giant Yggdrasil. With this milestone deal, the studio got the unique opportunity to integrate a large spectrum of features available in the YG Masters franchise.

Relying on the smart market analysis, extensive knowledge, and rich experience, the team is capable of crafting games suitable for both casual and advanced slot players. Minimum bets set at €0.20, average RTP which revolves around 96% and all-time favorite topics are crucial ingredients that make AvatarUX’s games globally appealing.

The Future of iGaming Is Here!

By combining traditional slot machine concepts and cutting-edge mechanics, the studio manages to deliver content suitable for global demographics. Thanks to feedback from players, streamers, and online operators, the studio knows how to manufacture content that ensures strong levels of customer acquisition and retention.

Talking about the biggest assets of this gang of innovators, the most prominent one is the vast experience in the gambling and iGaming industry. To start with, the MD, Marcus Honney, has been in the business for more than 25 years, keeping track of all the trends and tendencies.

With such a powerful team of experts and an agile workforce, the studio has all the necessary skills and knowledge to design products that push boundaries. Advanced mathematical models, immersive visuals, and a strong user experience are the crucial ingredients for success, and this creative community excels in all fields.

Numerous prestigious accolades crowned their immense success, showing that their efforts are recognized. The provider collected Gold Prize in the Game Innovation of the Year Category in July 2021. Three achievements were crowned with awards- CherryPop™, TikiPop™, and HippoPop™ heralded as releases that perfectly combine rich themes with the innovative PopWins™ bonus feature.

Speaking of rewards, the producer also received the Bronze in Slot Collaboration category, confirming that the partnership with Yggdrasil was a smart move for both parties. This acknowledgment is focused on agreements between providers, via a joint development process between studios, or through wider business contracts.

As for the milestone partnership, AvatarUX was added to YG Masters portfolio in the initial months of 2019, becoming the fourth studio to join the franchise following Rabcat, Northern Lights, and Fantasma Games. Thanks to this deal, Yggdrasil became the exclusive distributor of this provider’s titles, while AvatarUX gained access to BOOST®, Yggdrasil’s collection of proprietary in-game promotional tools and their GATI technology.

On top of that, October 2021 was marked with a licensing agreement with Stakelogic, giving the supplier exclusive right to use PopWins mechanics. According to the deal, the studio has a 6-month exclusivity period to implement the said elements into its releases. So far, Mystery Drop and Joker Drop were confirmed as the ones to host the engaging solution.

A unique feature and exclusive to AvatarUX, PopWins instantly became a huge hit among punters from all over the world. Designed to boost winning potential, this mechanic creates sequences of rewarding combinations, ensuring challenging gameplay and lots of valuable prizes along the way. When a punter strikes a win, this dynamic element literally “pops” to expand the reels, adding more symbols to ensure chances to hit more valuable combos.

In the initial releases bolstering this element, rows were expanding from four to seven, thus increasing the number of winning ways from an initial 243 to 33,614 if a punter triggers a lucky spin cluster. In PiggyPop, the number of winning ways amounts to 524,288. Worth adding is that these titles have a hit rate that amounts to over 20%, meaning the feature is triggered more than twice every 10 rotations.

Except for Lilith’s Inferno, other adventures from the developer’s portfolio are packed with PopWins. At the time being, Avatar’s titles are the only ones that have this cutting-edge mechanic, but thanks to strategic cooperation inked with the forward-thinking studio, Stakelogic can incorporate it in its titles as well.

One of the biggest virtues of this element is a high level of flexibility. Taking a look at the studio’s release which contains it, punters shall spot a diversity of popular themes, meaning it can be integrated into any concept.

Extraordinary temples, elaborate goldwork, stunningly painted landscapes, and majestic garden designs are some of the many examples of breath-taking Asian arts. Taking a look at any of these, one can spot a high level of attention to detail.

Having in mind that one of the branches of AvatarUX is located in Hong Kong, it doesn’t come as a surprise that their design is hugely impacted by the captivating oriental art. Interestingly, only one of the games they have delivered so far takes place in Asian countries and draws inspiration from local folklore. However, the way the characters are illustrated and painted resembles a lot of Asian art.

Lilith’s Inferno was the one to break the ice. Equipped with the frightening soundtrack, sharp graphics, and lucrative bonus features, this fast-paced game quickly gained the status of iconic. Following the solid success of this release, the studio unveiled its immersive PopWins mechanics. To date, eight games were delivered in the series- PopRocks, WildPops, CherryPOP, BountyPop, TikiPop, HippoPop, PapayaPop, and PiggyPop.

Altogether, AvatarUX is the supplier which is bound to flourish continuously and position itself as a brand that stands out in the ultra-competitive market. Always in touch with the most recent trends and demands, the studio utilizes powerful technology to build futuristic products and satisfy the demands of the most sophisticated clientele.