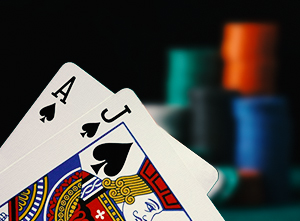 We at Games and Casino pride ourselves on thoroughly reviewed blackjack casino games and software platforms. Our online casino blackjack section is no different. We’ve broken down each software platform, from RTG to Microgaming, and described their unique rules, table limits, and player options.

Some software platforms, and therefore their casinos, are more blackjack dense than others. If you’re a blackjack fanatic, you’ll love the diversity these casinos have to offer in terms of side bets, tandem gaming, and rule variations.

Blackjack should need little introduction.  Numerous books have been written on the game from a beginner level to very advanced mathematical texts on card counting.  In North America, there can be little doubt blackjack is the most popular table game measured by the number of placements.  Outside of the United States and Canada it is still easy to find, sometimes under the name of blackjack variants like siete y media (Uruguay), pontoon (Australia), and rummy (Costa Rica).  This article will endeavor to introduce you to the game with sections on:

In a nutshell, the object of blackjack is to have more points than the dealer without going over 21.

The object is often incorrectly described as getting the most points without going over 21. That description does not mention the dealer at all.

There are two ways to win:

Note: Both ways to win involve a comparison between the player and dealer hands.  If the dealer gets to 17, a player 21 doesn’t beat the dealer any better than an 18.

That said, the following are the general rules as played in the United States:

For most hands, the strategy is the same regardless of the rules. However, for some, it depends on the rules. For this page, I will present two sets of rules, which will cover most games you will encounter in land-based casinos.

These strategies, known as the “basic strategy,” show the correct way to play any given situation, according to the player’s hand and the dealer’s up card.

For the American rules I shall assume the following:

To use this strategy, look up the player hand along the left column and the dealer up card along the top row. Then make the play in the body of the table. If the player doesn’t have an ace or does have one but must count it as one point, then it is called a “hard” hand. If the player has an ace and his other cards total l0 or less, allowing the ace to potentially be worth 11, then that is called a “soft” hand. The lower part shows how to play a pair, where splitting is allowed.

Europe is nicely much more consistent in their blackjack rules than the United States. Doubling is usually restricted to totals of 9 to 11. I also assume four or more decks, dealer does not peek for blackjack, dealer stands on soft 17, double after splitting is allowed, and surrender is not allowed.

The United Kingdom generally follows the European rule but allows doubling on any initial two cards.  If that is the case, then follow the strategy below for soft hands.  This strategy will also be appropriate in the United States with four or more decks and the dealer stands on a soft 17.

Given several major configurable rules as well as some obscure ones, the house edge in blackjack can vary a small player advantage to a house edge of about 2%. To start somewhere, let’s consider the following set of rules.

According to the Wizard of Odds blackjack house edge calculator, the house advantage is 0.50%.

Next, lets look at the effect of several common rule variations. The following will be the increase in the house edge. So, a positive effect is bad for the player and a negative one is good.

Please note there may be an interaction effect between changing multiple rules.  In most cases, this will be negligible.  However, do not combine peeking for blackjack with surrender as the surrender rule is worth only 0.07% when the dealer peeks for blackjack, but worth 0.63% if he does not.

If you see any other rule changes not addressed here, the Wizard of Odds has a much longer list of the effect of rule variations.

I can easily sum up my thoughts on side bets by saying that “All side bets are sucker bets.” This is true in every game, not just blackjack. However, if you must have more details, read on. Here is a list of the most common ones along with a typical pay table and house edge.

Blackjack has a very thin house advantage, so casinos are eager to change the rules to increase it.  This sometimes done with simply depressing the rules, usually paying 6-5 only on blackjack, but can also be done in more clever ways, giving the player a fun run his way and taking away more elsewhere.  These games also call for different strategies than conventional blackjack.  Few players know these custom strategies, so casinos profit even more due to player error.   Here are some of the most popular blackjack variants out there.

Let me guess, you’ve seen Rain Man, 21, or The Hangover and are thinking about getting rich yourself as a blackjack card counter.

Well, sorry, it’s not so easy. In fact, those movies exaggerate the advantage of card counting by many orders of magnitude. In reality, counting cards requires having a lot of money to make a little money, putting in the hours of play like a job at about a 1% advantage, while your bankroll goes up and down like a rollercoaster. Most people who take up card counting quit in frustration because it’s too hard to master, the bankroll swings are too stressful, it doesn’t generate enough money, and being detected by the other side.

There are books written about it, but my short advice is to not bother unless your motive is the mastery of the game, much like one might work hard to be a high-level player at chess or bridge. If you are still are not discouraged, here are links to some of my Wizard of Odds pages about it:

The Casino Blackjack software reviews above are sorted by software type. You can find more strategies on playing online blackjack in our blackjack strategy section listed below. Read our blackjack review for a little more information on the game.

A new addition to online casinos that have been gaining popularity recently is live blackjack where you can interact with a live dealer to give a more authentic experience. For further information, guides, and more, we recommend visiting Blackjackinfo.com

These bonuses allow you to play blackjack to clear the bonuses wagering requirements.

If you’re a tried-and-true blackjack purist, then you’ll find a home in nearly every casino—at the very least, each one will offer the classic game with very few game changes. The hard part, then, is just deciding where to play. And we can help with that, too.

Of the hundreds of casinos available on the Internet, we’ve created a list of casinos on each software platform that we feel embody fair play and fair payouts. We wouldn’t recommend them if we didn’t actively play them ourselves.

You can enjoy your blackjack game at these online casinos and have confidence that you’ll be given the highest quality customer service, game selection, and graphics, the online gambling world has to offer.

After all, we enjoy reviewing blackjack games almost as much as we enjoy playing them. Well…almost.

Do bad players cause other players at the table to lose

Bad players are just as likely to help as to hurt the other players at the table. In the long run, it all averages out and odds are the same regardless of how other players play. The reason people cling to myths like this are:

How does the dealer have the advantage at blackjack? Why don’t I just mimic the dealer’s strategy and come out ahead winning more on a winning blackjack than the dealer does

What happens when both you and the dealer bust? YOU lose. That gives the dealer a significant positional advantage. All the other rules that cut the player’s way do not overcome having to act before the dealer does.

The number of decks matters a lot. You can see from the table above on rule variations that the house edge is reduced by 0.19% going from six decks to two and 0.48% going from six decks to one. That is a lot, especially compared to the thin house advantage in blackjack to begin with. One reason is that the probability of a blackjack goes up as the number of decks goes down. This is due to the effect of removal. While the player will get a winning blackjack just as often as the dealer does, the player wins 3-2 when he gets one and loses 1-1 only when the dealer does. The value of getting the extra half unit is worth half the probability of a player winning blackjack. This is 4.65% in single deck blackjack and 4.53% with six decks, for a value of (4.65% - 4.53%)/2 = 0.06%. Another reason comes from more effective doubles with fewer decks. If you are doubling, you clearly don’t have any tens in hour hand and the dealer probably isn’t showing one either. That makes the rest of the deck richer in tens, which increases your chances of getting a ten after doubling. That effect of removal is more powerful the fewer the decks. I roughly estimate the benefit of that to be 0.08%. That still leaves 0.34% unaccounted for. I think that the remaining difference again gets back to the stronger effect of removal as the number of decks decreases. If both the player and dealer get stiff starting hands (12 to 16 points), then if the player hits and gets a good card(s), then he leaves less good cards for the dealer in the remainder of the deck. For example, here is the expected value of a player 10-6 against a dealer 6 by number of decks:

Note the expected value is 2.91% higher in a single-deck game. Such situations occur often. I plan to look deeper into this in the near future.

I think (insert name of Internet casino) is cheating at blackjack. I believe this because (insert adjective-laden rant here). Please add them to your blacklist.

I get this request a lot. It can apply to any game, but for some reason it’s usually blackjack. 90% of the time when I get this accusation is comes with no statistical evidence. 9% of the time there is some evidence, but after doing the math, it looks like ordinary bad luck. 1% it does indeed look fishy, such as the case with Casino Bar, in which case I’m happy to warn players against playing there.

I disagree with you about splitting eights against a ten. Why turn one bad hand into two

My basic strategy is not based on soundbite logic, but math. It cycles through the million or so ways the cards can come out for both player and dealer, averaging the net win for all ways to play the hand. In the end, it simply recommends the play that wins the most or loses the least. In the case of splitting eights against a ten, assuming six decks and the dealer peeks for blackjack, here is how much the player can expect to lose of his original bet by how he plays the hand:

As you can see, the player loses the least by splitting. If you have a disagreement about any other hand, please run it through my blackjack calculator, which is where I got the figures above.