Blackjack is generally accepted to have evolved out of French games such as "chemin de fer" and "French Ferme". It originated in French casinos around the 1700s and is derived from a family of card games that include Baccarat, Ving-Et-Un, and Seven and a Half. Ving-Et-Un is better known to Americans as "21" and to Australians as "Pontoon". 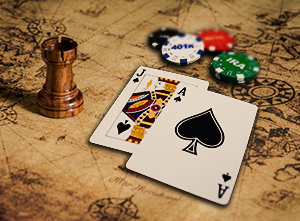 Of all the card games, though, it was Ving-Et-Un that crossed the ocean from Europe to the United States in the 1800s. When the game was first introduced, it wasn't a popular one, so gambling houses tried to lure in people with bonus payouts.

One bonus was a 10-to-1 payout if the player's hand had an Ace of Spades and a Blackjack (either the Jack of Spades or the Jack of Clubs). The hand was called 'Blackjack' and the name stuck throughout, even when the gambling houses decided to abolish the bonus payout. By 1919, special Blackjack tables were being made, and it was a little over a decade later when it became the third most popular of all Nevada casino card games. The first two were Roulette and Craps.

In the late 1950s and early 1960s, mathematical information was published that showed how gamblers could gain even a slight advantage over the house. Roger Baldwin wrote a paper in the Journal of American Statistical Association titled "The Optimum Strategy in Blackjack". He and the others used calculators and probability theory to reduce the House advantage.

One book about blackjack became so popular, it even made the New York Times bestseller list. Because of the resurging interest in blackjack, it went on to become the number one card game in the United States, and it still is today. Casinos made a lot of money on its new popularity and the game itself generated a lot of media attention.

Even with the public going back to the casinos, most houses did not like the success of a book that told players how to raise their advantage, so they decided to change the rules of blackjack to make it more difficult to win. But with people protesting by not playing the game, the loss of revenue forced the casinos to go back to the old rules.

What the casinos decided to do, though, was to make changes to increase their odds. They introduced shuffling machines, multiple decks, and frequent shuffling, among others. These changes, plus the methods in the books which were hard to master, gave the advantage back to the casinos.

Blackjack is a game where the rules are easy to understand even for the novice gambler. To beat the dealer, a player must accumulate cards with point totals as close to 21 without going over. 21, of course, is the object of the game.

According to the rules, face cards (Kings, Queens, Jacks) are worth 10 points, and aces are worth 1 or 11, depending on what the player prefers. Other cards are represented by their number. Gambling rules say that if a player and the House tie, it is considered a push.

These bonuses allow you to play blackjack to clear the bonuses wagering requirements.