Yggdrasil Wins Innovator of the Year For a Third Time 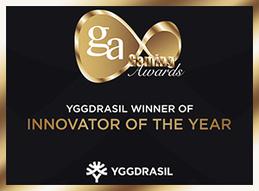 Once again, Yggdrasil Gaming has proven that they have earned the right to call themselves the innovators and game changers of the online casino industry. The company has been given the prestigious Innovator of the Year award for the third year in a row.

How Yggdrasil Took Home the Title

Several factors worked together in Yggdrasil's favor this year. First, the judges were highly impressed by the company's open platform initiative, Yggdrasil Game Server, or YGS, Masters. With YGS Masters, invited independent gaming studios are given the opportunity to have their content included under the Yggdrasil name for better market penetration.

In addition to the YGS program, they have also pioneered a unique, in-game promotional toolset called BOOST that has gained considerable popularity with operators around the world. Both of these campaigns have not only given Yggdrasil more clout, but they have benefited independent developers and global operators as well.

A Legacy of Innovation

Yggdrasil has never rested on its successes. Instead, the company continues to push the boundaries of possibility to remain on the cutting edge of the online gaming industry. CEO Fredrik Elmqvist commented that, "Innovation is in our DNA, and we constantly strive to remain ahead of the game by making our products cutting edge and unique."

Elmqvist's words ring true. Yggdrasil has consistently produced award-winning slots and unique programs that continuously redefine how online gaming looks. The company is highly prolific, and every title they put out is a stunning display of the best graphics, features and gameplay that the industry has to offer. The Innovator of the Year accolade is only the most recent in a series of awards and acknowledgments that Yggdrasil has collected since its inception.

When asked about his company's commitment to innovation, Elmqvist responded with the following comment:

"All of our innovations have been very well received by both operators and players. Supporting our customers’ success and having our games top of mind with players is what drives us to continue revolutionising the iGaming space."

With such a strong work ethic and earnest desire to continue a legacy of innovation, Yggdrasil is sure to do even bigger things in the year to come.