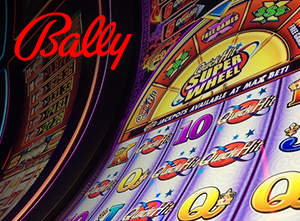 One of the most recognizable names on the global gaming scene, Bally has a long and impressive history reflected in the endless rows of sleek cabinets and a cutting-edge portfolio of online slots that bring fun across the world.

Today, this brand operates as the subsidiary of Scientific Games and offers contemporary solutions for the highly competitive land-based and online sectors.

It all started in 1932 when Raymond Moloney founded his Bally Manufacturing Corporation to produce wooden pinball machines very popular at that time. Named after their very first game Ballyhoo, the Chicago-based company soon began to take an interest in gambling equipment and became a successful supplier of one-armed bandits in the United States.

With the coming of World War II, many factories had to make adjustments to the assortments of goods and switch to munitions and airplane parts aiming to contribute to the victory. Bally was not an exception and was forced to pause with making slots until the end of the War.

Ray Moloney died in 1958 and overpowered by financial hardship enterprise was bought out by a group of investors and got back on track holding 94% of the Las Vegas market just ten years later.

Such strong domination was based …

… on amazing Money Honey, a true masterpiece of its time. Presented to the public in 1963, it was the first electrically operated slot machine, which was moreover, equipped with a bottomless hopper capable of automatic payouts of up to 500 coins.

During the 70s, the company continued to flourish and cater to casinos dollar slot cabinets, video screens, and random number generators. By the way, the talented inventor of RNG Inge Telnaus was hired by none other than Bally with the goal to create a concept of larger jackpots appealing to punters and at the same time risk-free for the house.

Meanwhile, in 1972 to be precise, the firm struck a deal with Gunter Wulff, the most famous German slot-maker at that time, as a result of which Bally Wolff brand was born. In the spirit of moving forward, Bally became the very first gaming company listed on the New York Stock Exchanges in 1975, which was a significant step in the long run towards the international conglomerate it is today.

In 2006 the company changed its name to Bally Technologies and in 2014 was acquired by Scientific Games and since then, its cutting-edge portfolio has been available via SG Interactive together with games made by WMS, Barcrest, and Shuffle Master.

Real-money games are catered through Wagered Web or Wagered Mobile platforms, the first one ensures top-notch performances of HTML5 releases on all desktop devices while the second hub is in charge of high-quality experience on different smartphones and tablets.

… such as Quick Hit, Hot Shot, and Blazing 7s Series, this legendary Nevada-based studio also boasts a range of variously-themed spinning adventures, as well as a striking collection of branded thrillers including Michael Jackson™, Playboy™, Betty Boop™, and Wonder Woman™.

Jam-packed with a variety of unique extras including the exciting Game-in-Game feature available on each reel, virtual pokies designed by Bally are enhanced with a pretty extensive betting range and a decent RTP above 96%.

No wonder, such a perky combination nicely blended into the innovative approach serves well for the great part of the gambling community meeting the needs and preferences of both low-rollers and active whales.