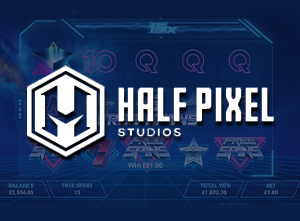 With so many developers joining the thriving iGaming industry, it may be a bit challenging to make out what differs them. Some of them opt to present themselves via a multitude of networks and platforms, while the others, like the one in question here, leave a minimal online footprint.

Instead of ordinary “about us” and “company history”, what we have to judge them by is their work, or to be more precise, their debut slot Retro Galaxy.

Do Half Pixel Studios’ games have what it takes to grab the attention of players?

With a collection of mighty features, visuals painted in the vibrant neon colors, and two eternally popular themes united in one work of art, we’d say they do. After all, there must be some fine quality recognized by one of the industry’s leaders, which inspired them to welcome this up and coming brand under its umbrella.

Stay tuned for more about Half Pixel Studios!

One of the first brands to establish this interesting tradition of collaborations with smaller independent producers was Microgaming.

Thanks to these alliances…

…players from all over the world got the opportunity to meet Gameburger, Alchemy Gaming, Neon Valley Studios, Pulse 8 Studios, Triple Edge Studios, and many more.

Announcing the launch of multiple titles for August 2020, the leading supplier mentioned HPS and its Retro Galaxy slot, describing it as “high-volatility action in a funky, retro-space adventure” that features Rolling Reels™, extra spins and a thrilling win multiplier for huge win potential up to 7,300x.

Needless to say that any studio which is hosted on Microgaming’s menu captures the attention instantly, and the same happened with this small provider.

One of the excellent ways to grab the attention of audiences from all over the globe is to have its collection of games (or a single one, doesn’t matter) listed in as many online venues as possible.

HPS seems to have done the homework, as its debut slot is part of some of the most popular and most visited entertainment facilities operating under several gigantic affiliate network.

One of the most renowned affiliate companies, this one gathers a network of brands that provide the finest products from the most forward-thinking content producers. Some of the venues running under its roof are Casoola, Pelaa, Kassu, Spela, Genesis Casino, Sloty, Vegas Hero, Casino Joy, Casino Cruise, Funbet, and several more.

Aside from these two humongous corporations, the product can be found in other establishments with positive reviews such as Guts, Oshi Casino, Chanz Casino, Dunder Casino, and many more.

Combining nostalgia for past, and its passions for futuristic details, the developer manufactured Retro Galaxy, a 5-reel slot with 243 winning ways.

To start with the ordinary features punters will encounter Wild, which acts as a replacement for all icons excluding Scatter. Present both during the base game and bonus spins, it can be found on reels 2, 3, 4, and 5. Then, there’s Scatter, which pays in any position. When 3, 4, or 5 of those appear on the reels they trigger 10, 15, or 20 complimentary rotations respectively. They can be found on all reels in the base game, while during bonus spins they can hit reels 1, 3, and 5.

Adding more fire to the game are rolling Reels, which remove winning icons, and fills their positions with new ones. Also, it generates multiple consecutive wins, and it features the Multiplier Trails.

A kind of a win multiplier, it has the power to increase the number of rounds in the base game- up to max 5x on the fourth and any subsequent roll. When in additional spins mode, its multiplying capacity enhances up to 15x.

Complementing the entire story perfectly the 80s-inspired synthwave track. As for the symbols, they are all well-designed and supercharged with plenty of vintage vibrations-courtesy of neon art.

Those who are loyal consumers of products coming from Microgaming’s creative workshop will surely recognize their proven formula for grabbing players’ attention- Multiplier Trails, 243 ways, Rolling Reels. When two parties think alike it’s already an excellent starting point and solid ground for them to enter collaboration and start crafting something together. Perhaps these very likenesses in their approach were the reasons the gaming giant welcomed this fresh brand under its umbrella.

While nowadays it’s not a rare case to see new developers incorporating some entirely new mechanics and features, this one decided to stay within the limits of something that has the status of a classic but comes with a twist.

And to be honest…

…such approach is far more difficult. Breakthrough ideas and inventive mechanics are always more than well-welcomed, that’s for sure, but you will agree that it takes lots of knowledge and expertise to find some innovative approach in the topic which has been exploited so many times in slot games.

This time and space-travelling adventure with all the powerful features definitely confirms that HPS does have the mentioned qualities, and what’s even more, the right set of skills to transform the idea into reality.

Any Plans for Future?

Though there is no official announcement from the studio itself, based on their initial steps, punters can expect great things and lots of action on the horizon.

First of all the studio’s joined forces with an iGaming giant, which will, without any doubt, bring plenty of benefits to both sides, and what’s even more important- lots of quality delivered to players’ screens.

Then, their premiering product is already part of so many well-known online venues, giving them fantastic visibility from its debut game.

All in all, Half Pixel Studios seem like a promising brand, and the only thing left is to wait and see if their upcoming releases will justify the fine first impression.