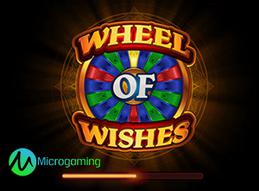 Casino content supplier Microgaming is teaming up with another independent studio to bolster their portfolio.

Alchemy Gaming is the start of the show this time when their new Wheel of Wishes offering.

This video slot will become a part of the supplier’s progressive jackpot network which is already the largest one in the world.

Set against the sands of Arabia…

…the game features high-quality graphics and intriguing gameplay. Mystical symbols such as genie lamps will guide punters to a place of massive riches – the Wheel of Wishes that can award a big jackpot.

After a slew of new games that were announced and released in January, the supplier company is continuing with new releases into the next month.

The main feature of the game revolves around the Power Spin. It’s a special mode triggered by the appearance of two scatter symbols.

During the power spin, the central reels turn into one giant reel with giant symbols. And the remaining two reels are filled with identical high-paying items.

If the giant prize wheel symbol appears during this mode…

…punters will get to spin it. And once it spins – one of the jackpots is guaranteed!

There are four levels of prizes to be had here. Mini, minor, major, and coveted WowPot. It’s the last one that holds truly huge prizes, but the lesser tiers are nothing to sneeze at either.

Like in most progressive games, the higher your bet the higher are the odds of the features triggering that lead to the prize.

But this offering contains a slight shortcut. Through a side bet option, it’s possible to permanently enable Power Spins.

This will cost punters 10x their current bet. The board transforms in the same way as when the power spins are triggered by the scatters.

“We are delighted to present Alchemy Gaming’s debut title and the first in a new wave of games to join our progressive jackpot network this year. The addition of Wheel of Wishes with its revamped WowPot jackpot is sure to set new records, while the introduction of the Power Spins and Power Mode make for fantastic gameplay experience.

We are pleased to announce that the game’s first Major progressive jackpot win has already been hit during an early release period, with one player winning €131,574.55 and total payouts across all four jackpots exceeding €1.2 million.”

We are incredibly excited for the wider launch of our debut game with Microgaming and can’t wait for players to take a spin on Wheel of Wishes.”

This new title with innovative gameplay and juicy jackpot prizes will be available starting the 11th of February at all online casinos who carry games from this developer.