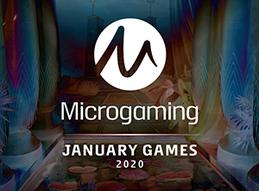 Game developer Microgaming has announced plans to keep up their prolific game release schedule in 2020.

The company has just revealed plans for four new games to be released in the first month of the new year.

This marks the continuation of their four titles per month schedule which the developer has been pursuing for quite some time.

This January, Microgaming is hitting the ground running with new and exciting games from several third-party developers.

…is a trip to ancient Egypt in the Book of Atem. Developed exclusively by All41 Studios. This developer has previously produced Magic of Sahara in July last year.

Now they are back with a 5-reel, 10-payline title that features extra spins and expanding symbols. The offering is live right now and will delight punters with a handsome winning potential of up to 5000x.

Soon after the Egyptian trip…

…Just for the Win (known for Tiki Vikings and Tweethearts) will take players to the Asian content in Double Lucky Line. The title is also the main feature as the center reel only features double symbols to optimize win potential.

There’s more, of course, as players will also have random wilds and extra spins to look forward to in this offering that will bring a taste of Asia to the release lineup on January 14th.

The globetrotting adventure is far from over…

…because Triple Edge Studios is taking gamblers to Africa. It’s safari time in African Quest, a 1024-way slot with Hyperspins. The trademark mechanic which lets players strategically pay for respins has previously been featured in Break da Bank Again where it was received well by reviewers and punters alike.

…as the developer has also made high-paying stacked symbols, extra spins, and multipliers a part of this game.

Extra spins turn wilds into multipliers with a possibility of a huge x64 multiplier if several wilds land at the same time.

The safari starts on January 21st at all online casinos that feature games from this software provider.

…is The Incredible Balloon Machine by Crazy Tooth Studio. The makers of last year’s Arctic Valor are back with a whimsical offering that’s a completely new take on RNG casino games.

Paylines and symbols are gone and instead, players will inflate balloons to increase their win while trying to collect it before the balloon pops.

To see this strange yet innovative concept in action you will have to wait until January 28th.

And all this is just for January…

…because the company plans on keeping up this release schedule for the entire year. That means, according to plans released on the company site, that punters have dozens of new games to look forward to this year.

“The year ahead is shaping up to be very exciting as we add new games to Microgaming’s progressive jackpot network, take on new adventures with some of our favorite characters, and continuously debut exclusive games with new and dynamic themes.”

Source: “Microgaming kicks off 2020 with a wealth of January game releases”. Microgaming. January 7, 2019.