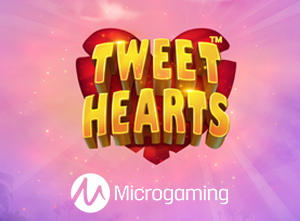 Microgaming has revealed a new game release, set in a tropical paradise and centering around two lovebirds.

The tranquil love nest is called, Tweethearts, and it features cute graphics and exciting and dynamic features that shake up the gameplay and allow for some truly interesting mechanics.

The game is developed by Just for the Win (JFTW), a third-party developer who previously made Tiki Vikings, which also released under the Microgaming brand.

James Buchanan, Director of Global Operations at Microgaming, said about this new release

“Marking the fifteenth game developed by Just For The Win exclusively for Microgaming, Tweethearts combines colorful graphics, an idyllic atmosphere, and a serene soundtrack to create a truly unique and charismatic slot. Random Wilds in addition to the Double Lucky Line feature adds another element of excitement to the gameplay, and this new title is set to entice players of all levels.”

“We are thrilled to introduce Tweethearts, a vibrant online slot sending players soaring deep into the heart of a secret jungle and delivering exciting gameplay along the way.”, continued Johan Persson, the CEO of the third-party developer.

“The action never stops in this tropical love bird themed game, with the Double Lucky Line feature and an array of wilds driving the action throughout. The extra spins feature can be exceptionally rewarding, with win potential of up to 2,500 times the initial bet. We can’t wait for players to experience the sights and sounds of Tweethearts’ jungle paradise,” he concluded.

The 5x3 game has 17 paylines and comes with a whole host of interesting features. The most innovative is the Double Lucky Line where the middle row of the playing area is stocked only with double symbols, making it so punters can get up to 10 of a kind win lines.

There are also random wilds which can happen any time in the base game and fill random positions with up to 6 wild symbols.

If five or more extra spins symbols land, the extra spin mode begins which has its own twist on random wilds as when they appear they also unlock double symbols in that position.

The UK-based software company is continuing its prolific release schedule after just having unveiled another new game recently.

The game comes from another third-party studio, Neon Valley Studios, and is inspired by the northern lights phenomenon. Aurora Wilds is already live across the online casinos that feature Microgaming games.

The development studio was established in 2016 by developers, game designers, and professionals who are some of the most creative in their fields.

They are known for games like Tiki Vikings, Ruby Casino Queen, and Reel Splitter. The studio has 14 games under their belt so far and eight more exciting offerings on the way.

All their games are 100% mobile-friendly.

Source: “Microgaming takes to the sky in Tweethearts”. Microgaming. September 18, 2019.