Microgaming to Take Players on Mysterious Journey in Magic Of Sahara 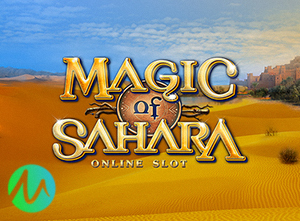 Casino content developer, Microgaming, has announced a new video slot that will take punters on an enchanting trip through the Sahara Desert.

There is treasure hidden in the oases that lie among the dunes. Will you find it or will you be led astray by a mirage?

Developed by All41 Studious, who previously made Le Kaffee Bar, Magic of Sahara is a five-reel and nine-payline game with special features including stacked wilds, extra spins, and a Token Chain bonus.

Bringing the Wonders of the Desert to Life:

Microgaming is promising punters an immersive and unforgettable atmosphere as they try to brave the desert heat in search of big wins.

In order to bring the majesty of the desert to life…

…the developer has imbued the game with a detailed and lavish art style as well as an extraordinary soundtrack that will keep players hooked to this world of mystery and magic.

James Buchanan, Director of Global Operations at Microgaming stated that All41 studios have created a truly immersive world and that the game’s dynamic day to night transitions will create “a spellbinding experience.”

Another spellbinding thing to think about is the fact that Microgaming’s progressive jackpot network has paid out more than 89 million euros in the first half of 2019, a development that has turned eight lucky punters into millionaires and brightened the lives of 380 others with prizes north of 10,000 euros.

The first thing players will notice when they start a game is the row of tokens on the top of the reels. This is the Token Chain bonus.

…a single token is added to the chain. Once players have more than twenty-five it’s extra spins time.

It’s, of course, also possible to get them by having three scatters land on the reels.

The features don’t end there:

There are also stacked wilds on reels 3 and 4. And during free spins, all reels can be covered by wilds!

The company is a developer which supplies award-winning software to leading casino operators worldwide. Credited with developing the first truly online casino software in 1994 and the first mobile casino in 2004 their products include casino table games, poker, video slots, bingo and more.

Known for their licensed games like Game of Thrones and Jurassic World, they also publish their own original titles in cooperation with independent development studios such as the soon-to-be-released Jungle Jim and the Lost Sphinx which was unveiled at iGB Live! 2019 in Amsterdam and is slated for a November release.

In the last few weeks, it has also released a game based on the adventures of Sherlock Holmes in cooperation with the famous indie developer Rabcat. Sherlock of London takes players to the grimy streets of Victorian London where a deadly game of cat mouse is afoot as Sherlock tries to catch up to dangerous criminals.