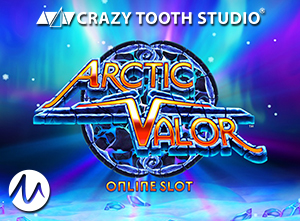 Industry giant Microgaming has recently announced a long-term supplier agreement with independent game developer Crazy Tooth Studio. Crazy Tooth's most recent release, Arctic Valor, is the first official game that the company has created exclusively for Microgaming since the deal was struck.

Crazy Tooth Studio's president Ben Hoffman says that he and his team are "very excited to be working with Microgaming" because it will help them deliver their "innovative slots and games to new audiences."

Battle Alongside Valkyries in Arctic Valor

The new Arctic Valor slot features six reels and a whopping 4,096 ways to win. The game draws heavily upon the Norse myths of Valkyries. These fierce and beautiful women served the god Odin and had the power to take worthy soldiers to Valhalla and doom those they did not favor to a fate worse than death. In Arctic Valor, players get to taste the thrill of heroic battles while racking up big wins.

Sparkling weapons, brightly colored snowflakes and breathtakingly lifelike characters grace the frozen battlefield, and players are treated to gorgeous animations of the Valkyries in action when the symbols are stacked. When these ethereal graphics are combined with an exhilarating soundtrack, the result is a game that is completely enthralling.

Microgaming's Games Publisher David Reynolds commented that the game "provides a visually stunning journey into a land of ice and snow, complete with a fantastically vibrant, Norse-tinged atmosphere."

Players get to ride alongside the mighty Valkyries towards victory and spoils with every spin.

The most exciting feature of this game is the Falling Icicles. With each turn, the icicles above the reels grow larger. At random intervals, one will crash onto a reel cover up to three symbols. When these icicles shatter, players may find wilds or instant wins hidden beneath.

If three or more scatter symbols appear on the reels, an exciting free spin bonus round is triggered. During the seven free spins, icicles are constantly crashing into the reels to reveal big rewards and heroic Valkyrie animations.

Between the high-energy bonus rounds, the heightened tension of waiting for falling icicles and the opportunity to win 4,096 ways, Arctic Valor is the type of slot to leave players feeling amped up and invigorated to keep playing.