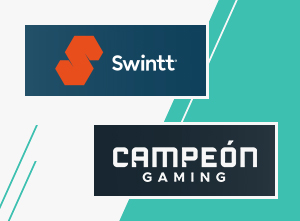 Customers at Campeón's Malta-licensed platforms will be able to play a selection of over 120 titles that have emerged from Swintt's studio since it debuted in 2019, according to the agreement. Players will be able to select from a few of the casino's most beloved slot titles, like Master of Books, Vikings of Valhalla and Extra Win X, or go for something new with Aqua Lord. If you're looking for games with some extra features, try Aloha Spirit XtraLock or Mystic Bear XtraHold. For a celebrity-endorsed option that's sure to be fun, check out The Crown starring Vinnie Jones.

David Mann, Chief Executive Officer at Swintt, said: “While Swintt has gone to great efforts this year to expand our outreach and make our award-winning titles available to players in new markets all over the world, the old adage “home is where the heart is” certainly still rings true.”

George Merodoulakis, Executive Director and Group CCO at Campeón Gaming, said: “Campeón Gaming is a brand that prides itself on innovation and supplying the very best in tailor-made casino content to customers – and in Swintt, we believe we’ve found a supplier that shares these hugely important values.”

Founded in 2019, Swintt is a fast-growing online casino provider which operates from its headquarters in Malta. Swintt is a newcomer to the world of online gambling, but it has quickly made a name for itself with an impressive portfolio of over 120 games. The company’s games are known for their high-quality graphics and engaging gameplay, and they have already been well-received by players around the world. Its rapid rise to success is all the more impressive given the highly competitive nature of the online gambling market. With so many well-established companies vying for attention, Swintt has managed to stand out from the crowd and become a force to be reckoned with. There is no doubt that Swintt is a company to watch in the coming years. Thanks to its innovative approach and commitment to customer satisfaction, the developer has quickly become one of the leading providers in the online casino industry.