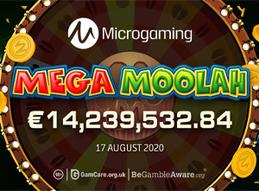 Microgaming’s smashing-hit Mega Moolah slot has made another lucky player richer for the seven-figure win. By triggering a whopping €14,239,539.84 prize at LuckyCasino, the Swedish punter has become the eighth millionaire so far this year to have been made on the software provider’s record-breaking progressive jackpot network.

In this particular online gaming venue, this has been the biggest ever won jackpot since its opening. The casino in question was launched in 2015 and relaunched in 2018 after it has been purchased and revamped by online gambling group Glitnor.

As it is with all jackpot wins on Microgaming’s jackpot network...

… the lucky winner will get its wins in a lump sum. The €14.2 million jackpot is the largest one produced by Mega Moolah slot so far this year.

Before it, the record for 2020 was kept by the Jackpot City user who hit a €10.7 million jackpot in April on this widely popular progressive slot. The provider’s jackpot network has produced eight millionaires this year alone, while this recent win marks the largest euro jackpot to have ever been hit in Sweden through Microgaming’s progressive jackpot network.

Congratulations to the Lucky Winner

As said, this jackpot win was the highest one hit in LuckyCasino ever. Licensed by the MGA and Spelinspektionen, the platform offers all types of entertainment options, including the elaborate sportsbook. The player who won over €14 million is a Swedish resident and has made quite a record in the casino.

Martin Sidenvall, Casino Director at Lucky Casino, said this was a historic moment for the brand:

“From everyone at Lucky Casino, it is a historic moment - to be able to call our lucky winner and announce that the third largest euro jackpot win ever in Mega Moolah has gone to one of our customers in Sweden is something we could only dream of.”

“Congratulations to Lucky Casino and their player on the tremendous win through Microgaming’s Mega Moolah. The win marks the largest euro jackpot win in Sweden through our progressive jackpot network! Mega Moolah continues to be a favorite among players worldwide, and we are thrilled to add even more progressive games to the jackpot and network this year!”

News about the latest massive jackpot win comes right after the Microgaming announced preparations for the launch of more slots that will join the titles in their progressive jackpot series.

Its network will be expanded with the addition of upcoming releases by its independent studios, including:

Alongside Mega Moolah, the most recent progressive provider’s slot also has shown as very rewarding. The Atlantean Treasures™: Mega Moolah released in February 2020 has produced a colossal win of €7,784,425.63 just a couple month after its launch, in May. Absolootly Mad™: Mega Moolah slot also noticed jackpot wins.

Besides offering generous winning potential, these types of developer’s slots come with very engaging gameplay and numerous interesting special features that are enhancing the playing experience. Whatever the reason, it’s a fact that these slots are favorite amongst the players and are widely popular.