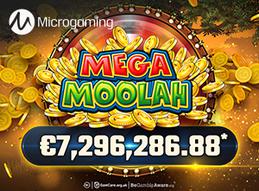 Even through it was developed more than 15 years ago, Mega Moolah is still one of the most popular in the online slot sector. In December 2021, one player won €3.9 million on Mega Moolah Goddess, and another winner was made at the beginning of February 2022, signifying the year's first Mega Moolah millionaire. On February 6, 2022, the winner was an individual who had won a jackpot playing Mega Moolah on February 5. He subsequently became the 70th millionaire from the jackpot after winning a whooping €7,296,286.88.

Mega Moolah Over the Years

The original version of the online slot has delivered a slew of life-changing payouts and world-record victories over the years, including on September 28th, 2018, when a lucky Grand Mondial Casino player won €18.9 million setting a new Guinness World Record for the biggest jackpot payout in an online slot game. That record was unbroken until April 2021, when a player at Napoleon Sports & Casino, in Belgium, won a stunning €19.4 million on Absolootly Mad: Mega Moolah, created by Triple Edge Studios.

In 2006, Microgaming developed the original Mega Moolah, which debuted in November with a €1 million top starting seed. This online slot with over 18.4 million jackpots paid out across all levels and games for a total of more than €919 billion in winnings!

Andrew Clucas, CEO at Microgaming, commented:“Fantastic to see the first Mega Moolah win of the year, particularly as it’s another sizeable seven-figure sum – huge congratulations to the winner! An amazing 15 years after taking its first bet, the mighty Mega Moolah slot continues to be extremely popular and pay out massive wins such as this Mega €7.3 million* reward. Long may that continue!”

Since the early days of online gaming, Microgaming has been a leading provider of casino games. The firm, which was founded in 1994, is one of the world's largest casino operators nowadays. The Isle of Man-based brand produces online casino games that are accessible and friendly to mobile devices. They offer bingo, poker, live dealers, sports and trading solutions, and their most popular titles online slots. They introduced Quickfire in 2010, a studio that is a more specialized in developing slots. It is a gaming vendor that supports the creation of third-party game applications and white label casino solutions for other companies in the business.