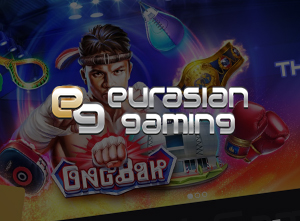 Established in 2017, Eurasian Gaming presents itself as one of the leading online game providers. Positive that their products ensure great performance and the highest degree of player appeal, the supplier pays special on every single segment of production, including music and sound effects.

Specialized in crafting engaging content for different markets and demographics, including the United States, the producer combines solid math models, actionable features, and adaptive layouts. In terms of categories, their portfolio accommodates a wide array of slot games, along with a solid selection of bingo and fish games.

Striving to run a business in line with the most rigorous standards, the studio obtained certifications from multiple relevant institutions. To start with, they are licensed by Isle of Man, one of the first jurisdictions to come up with legislation specifically designed to cater to the needs of gambling and e-gaming enterprises, while fully protecting customers. Also, the website indicates that they are greenlighted by iGaming Labs, and ISO/IEC-certified.

Keep reading to take a closer look at Eurasian Gaming!

Gathering a community of motivated and enthusiastic people, Eurasian Gaming is a team of passionate people with the same vision- to provide unparalleled experience on both desktop and mobile platforms. Some of the members have been part of the industry for many years, while the others have just ventured into the online gambling industry. Together, they make a team that rocks.

Let’s start with Saverio Castellano, the CEO, and founder of the studio. He used to be the art of Aristocrat, in charge of “doing slots” and he also worked as a consultant in Novomatic. In November 2014 he founded GameART, another studio known for impressive games.

Riccardo Natali, Game Development Manager is in charge of multiple stages of development. His duty is to ensure a fully functional back office for smooth integration (income, bet, win, sessions, spins, etc), RNG certification, utilization of HTML5 technology, and more. At the same time, he’s part of XYZ Development, a company specialized in web and mobile apps, HTML5 slots, and more.

In charge of the amazing music in their games is Martin Bezjak, Music Composer, Audio Director, and Producer at Epix Productions. Martin also worked for GameART, where he composed music for some of the top-performing adventures such as Circus of Horror, Santa's Farm, Night at KTV, Joan of Arc, King of Monkeys 2, Chinese Zodiac, and 4 Symbols.

These are just some of the employees thanks to whom players are delivered enticing stories with interesting themes and dynamic features. Be its reels and rows, colorful bingo games, cluster games, or fish hunting missions, they are willing to put their skills and knowledge to the test and make the impossible come true.

From the very moment they joined the industry, Eurasian Gaming has captured the attention of multiple renowned brands from various corners of the world. Its releases are found in numerous portfolios of Italian casinos but are also incorporated in catalogs of globally-acclaimed operators.

One of the partnerships was penned with AdmiralYes, the Italian online casino by Novomatic Italia. This agreement came shortly after the studio announced its collaboration with OIA Services Ltd, which resulted in the integration of its products to Betaland and Enjoybet’s portfolios.

Speaking of Italy, the developer also joined forces with Macaowin, the online brand owned by Ricreativo B SpA. Let’s not forget to mention the Sisal deal, as well as alignment with Diecimilauno S.p.A, a company that owns Zonagioco.it.

Furthermore, the enthusiastic supplier entered strategic agreements with companies operating in other parts of the world. The provider agreed with Desafio Partners, which brought the opportunity to exhibit the games in the LatAm market. October 2021 brought them cooperation with Salsa Technology, as another opportunity to strengthen their position in Latin America. Also, their content was added to the EveryMatrix platform and became part of the Slotegrator offering.

On top of that, their adventures are found in Vegas Crest Casino, CyberSpins, Ditobet Casino, and Supacasi casino, with many more to come. As we mentioned, products from this studio hold multiple approvals, compliant with strict standards, which is precisely what makes them a desirable business associate.

A single glance at the studio’s gaming library reveals quite a solid assortment of games. Aside from slot titles, which are the most numerous, the producer also offers a couple of bingo and fish games.

As for one-armed bandits, a wide variety of themes is spotted, offering punters the opportunity to visit the enchanted forests, travel to Egypt, grab a bite of juicy fruits, learn some magic tricks or spend a while in the haunted house to see how brave they are.

If you have ever wondered what is the catch with fish games, Eurasian Gaming gives you a unique opportunity to find out. Although relatively new to the online gambling sector, this genre has been popular for quite some time, especially in Asia. They are usually composed as fast-pacing battles and are filled with versatile prizes.

Finally, bingo is also one of the games whose popularity exploded when introduced to the digital world of entertainment. Wanting to spice the gameplay up, the studio wrapped it up in a couple of players’ favorite themes, so we have Caishen Riches Bingo, Neptune Bingo, and more.

What all of their games have in common is optimization for versatile international languages. English aside, they are available in Chinese, Italian, Spanish, Swedish, German, Portuguese, and Thai. That’s precisely what they mean by engaging players in diverse markets and demographics.

Let’s not forget to mention a solid assortment of features. Cloned reels, cluster pays, extra spins, multipliers, wilds are just some of the rewarding elements found in their stories. Some of them come with Dynaways, which means a dynamic number of winning ways.

The way things look at the time, it is more than obvious that this studio has plenty of potential. With such a colorful content catalog, Eurasian Gaming is destined to reach the highest heights and position itself as a true leader.