With a focus on high-quality visuals and gameplay, GameArt is one of the newer casino software providers, having first been founded in 2013. They're licensed to operate from Malta, but they have offices in Serbia, Italy and Slovenia as well. While the bulk of their games tends to be Internet slots, they also provide a limited number of games for video lottery suppliers, which is another market that sees a lot of growth.

Something fairly interesting is that this company builds their games in both HTML5 and Adobe Flash. This is noteworthy because most newer providers tend to stick to one or the other. Offering titles in both formats give them the most flexibility, but it comes at the cost of needing to build two versions of the same game. This approach has obviously been working out for them since they've seen quite a bit of growth, and this has included picking up a number of big-name operators in both the online casino and land-based, video lottery markets. 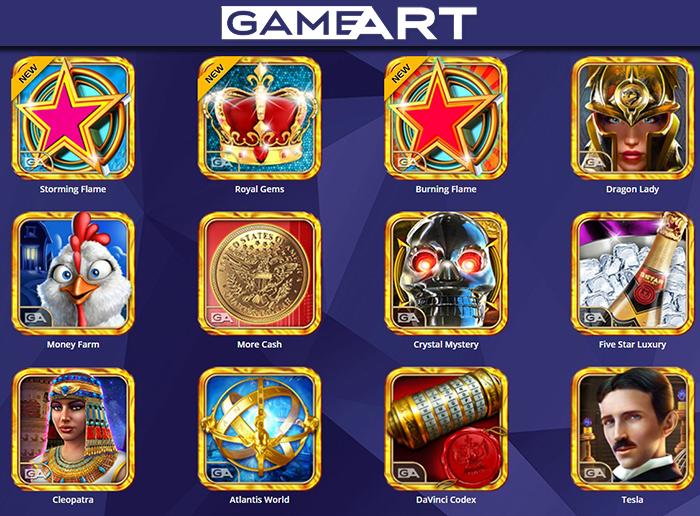 The main focus for this company is on video slots. They work almost exclusively within the 5x3 and 5x4 formats, and they don't seem interested in trying to gain "cheap publicity" by going with atypical or uncommon game layouts, something that a number of similar companies tend to do. In terms of game quality, they do have strong graphics, but a lot of their games look and feel similar to each other. Ironically, it's their clean-cut look and appearance that does this because the games come across as having their graphics and visual aesthetics seem almost surgical. This is great for maintaining an awesome look, but it could hurt them in the long run if they get a reputation for producing a lot of games that simply look alike.

In terms of the quantity of their games, there aren't a whole lot of them, but all of their titles are available for both desktop and mobile. This helps to give them a leg up for the future as things keep pushing in the mobile direction, but it also makes it easy for players on any type of computer to get in on the action. Since they use HTML5 in addition to Flash, the level of flexibility they have for their players is pretty outstanding.

The bottom line is that GameArt has done a pretty good job, especially with their mobile casino games. They have good graphics and a limited selection of titles, which isn't such a big deal since most casinos today use software from multiple developers. One thing that could hold them back in the future is that their games are presented as being very much like each other, but if they tweak that a bit, they'll have a great future ahead of them in the online casino game development industry.