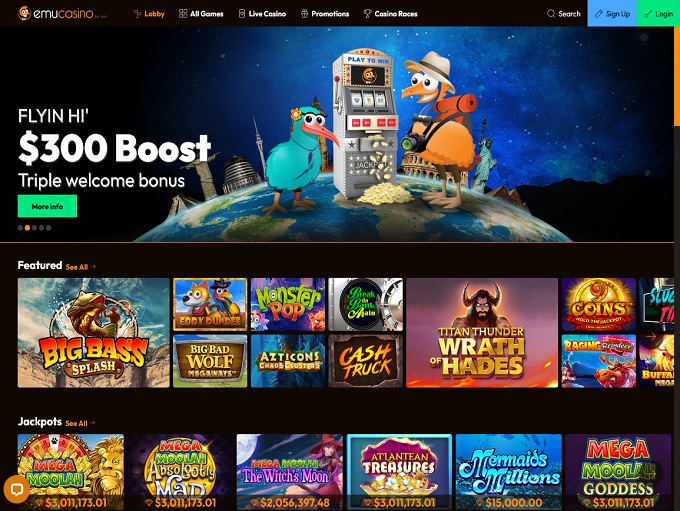 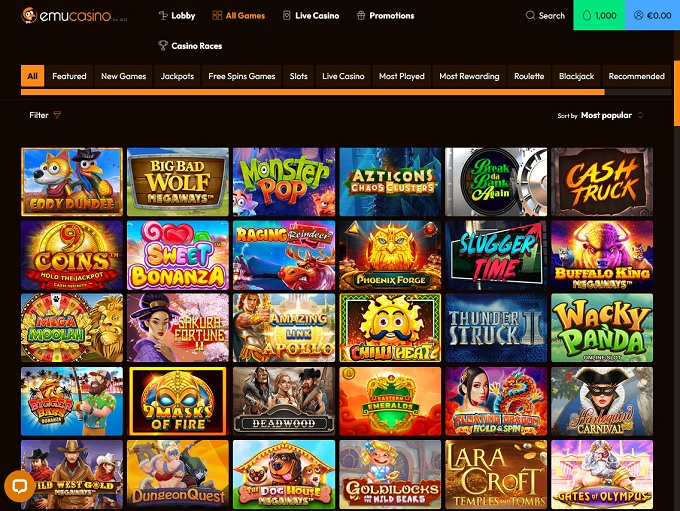 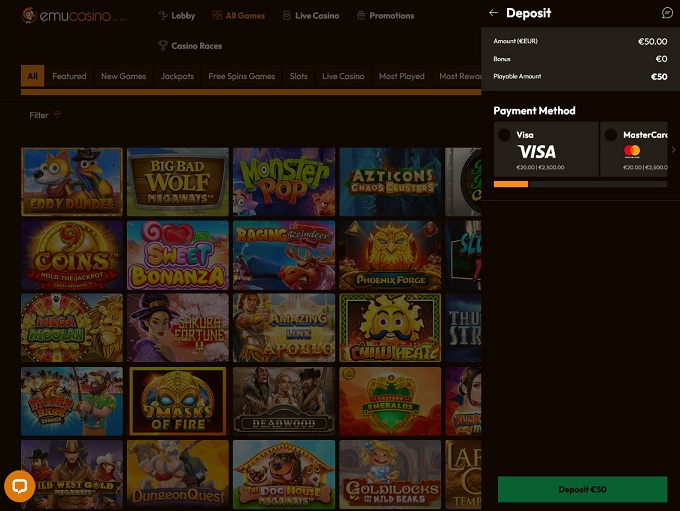 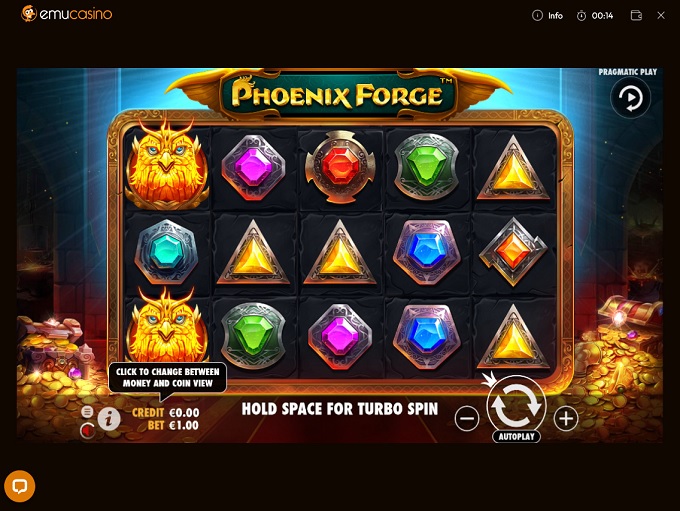 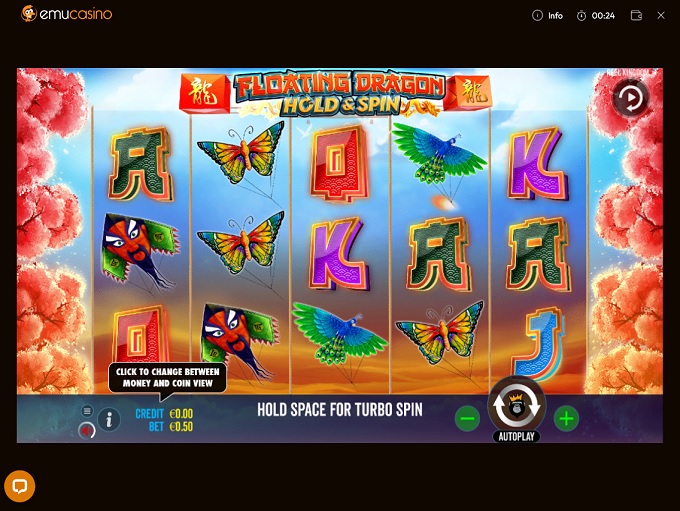 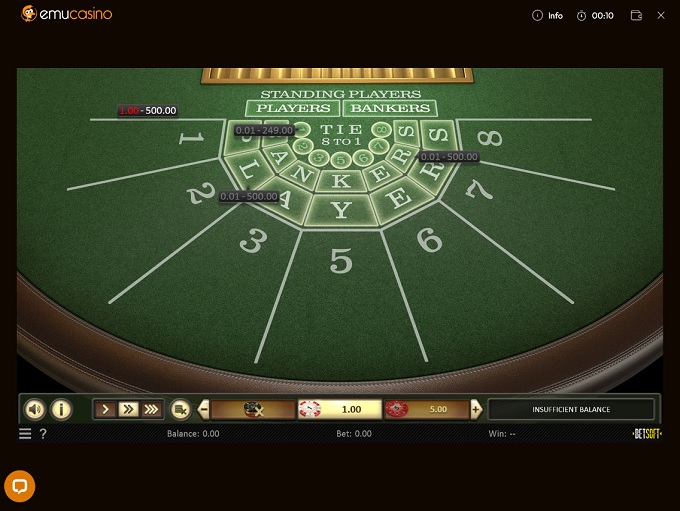 EmuCasino is an Australian-themed online casino that has a license to operate from Curacao. This is admittedly not the strongest license available, but they have been running since 2012 with a reasonable reputation. Along with that, they have the eCOGRA Safe & Fair Seal, which is the single most relevant and important independent certification that you can have as an online casino operating today. This all combines to tell us that it's completely reasonable to have peace of mind in playing with this establishment.

One thing players should know right away about this site is about its EmuShop. This is their version of a loyalty rewards store. Essentially, you collect points from your real money play and can exchange them for real-world prizes in a way that you probably haven't seen before. The more you earn, the higher you go through the different levels (newbie, bronze, silver, gold, platinum and elite), and the more points you earn for the same amount wagered.

One of the big advantages of this site in particular is that they have lots of companies that have contributed games. This starts with the Microgaming Quickfire platform, which itself has titles from several different providers like Endorphina, NextGen, Iron Dog Studio, Habanero Systems, Magnet Gaming and a variety of others. Along with that, you'll get access to the full line of BetSoft titles as well, and those include plenty of high-end games and 3D slots. The software selection is great, and that's going to give you plenty of different types of experiences that you can pick from.

As far as getting logged in and actually playing goes, they make that really easy too. If you're the type of player who prefers to play from a computer, then you'll be in great hands with their no-download, instant-play platform. You can run this platform from your web browser within Windows, Mac, Linux and other operating systems. However, if you want to take your play with you while you're out and about, you'll need to use the mobile interface. This works on smartphones and tablets with all kinds of operating systems, which includes iOS, Android, Blackberry and others. It's clear that flexibility and inclusiveness is the name of the game when it comes to getting players in with their favorite games at this site.

Several hundred slots are available, and the genre as a whole is handled in a very smart way with lots of ways to search through the different options to find exactly what you're looking for. They have three-reel and five-reel games along with some that don't fit these two main sub-genres. A whole lot of different themes and visual styles can be found here as well, and on top of that, they even have some big progressive jackpot titles like Mega Moolah, which has held the world record for the largest jackpot anyone has ever won on the Internet.

If slots aren't your thing, or if you just want a break from them, then this casino has you covered with Baccarat, roulette, craps and several different styles of blackjack. Along with that comes a great video poker and casino/table poker selection. Other games that aren't necessarily under the table games heading like keno, scratch cards and parlor games can be found here too, so you can see that their selection is particularly well-rounded. This is a site that has virtually everything you could want in the casino genre.

A big plus for this casino is that they don't have any limits on withdrawals whatsoever, so you aren't going to get held up breaking up your payments into smaller pieces if you run up a lot of winnings. MasterCard, Visa, Neteller, Skrill, Instadebit, Euteller, Bitcoin, Trustly and some other banking methods can be used here without a problem.

On the reliability of their cash outs, their reputation is pretty strong, but not all players feel comfortable playing with a site that's licensed in Curacao. However, this casino is a bit different since they have the eCOGRA Safe & Fair Seal that gives you an arbitration option if you have a dispute with this establishment over a cash out (or anything else).

The live chat messenger is really the option that we recommend the most for players when it comes to getting support. It's quick and easy no matter if you're using a mobile device or if you're on a computer. Telephone and email options are also available, and all three methods can be used 24/7/365 with no gaps in service under typical conditions.

EmuCasino is a bit of an odd name for a site, but we've seen stranger. The story here that most players are going to care the most about most of the time is what's up with the Curacao license. Under normal circumstances, we'd recommend looking for other evidence that you can trust a site before you play there, and we think that we have plenty with the eCOGRA Safe & Fair Seal and the reputation of this site in particular that's been running since 2012. If you don't feel the same, then that's completely fine because we have a lot of other sites with the same software packages and game selection available that have licensing in other jurisdictions that you might prefer.