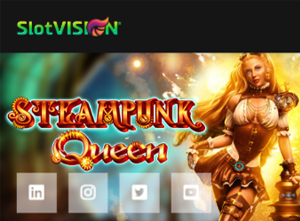 SlotVision was established in 2018. It is a Slovenian company, although like all other gaming companies it operated in the worldwide markets. Cutting-edge style, classic influences and smart gameplay lead the way forward. The company seeks to achieve its goals with a combination of impressive visuals and game mechanics that keep the player interested.

The company took its time to develop a strong library of slots before hitting the markets, ensuring that the players have a sizeable selection of games to try. This has led to casinos and turnkey providers quickly adding the company’s selection to their catalog, which in turn means more and more players adding the games to their favorites.

The two things that stand out the most are the features and graphics. Neither brings revolutionary new winds to the gaming world (and with the markets as brim-full as they are, this is hardly even possible), instead, they seek to imprint the games with a clear and distinctive style.

This is especially true when it comes to graphics. Detailed to the point of realism, the starting greens and animations will immediately draw you in. What’s surprising is how the style changes when you enter the reels. There you will find a collection of symbols that fit the theme perfectly, combined with background graphics that set the feeling even higher. Sounds and music bring the feeling of immersion even higher.

To keep things interesting the company employs a vast variety of themes, often about subjects that are left untouched by other companies. There are a fair amount of popular releases in use too, resulting in a collection that has a little bit of something for everyone.

With the graphics set the mood for entertainment and enjoyment, it’s the job for the features to add the excitement. These often aim to transform the basic wins into a whole new level of massive prizes. All the basic features from wilds and scatters to free spins and instant wins are in use. In addition, you also have some specials that build up further wins by working as multipliers or jackpots on top of this all. This all is something that you need to experience yourself.

Though the company is originally Slovenian, it actually functions from Cyprus. However, despite these multinational operations, the company doesn’t hold any national licenses. This is left up to their partners, which includes names like BlueOcean Gaming, who in turn provide an array of turnkey services and associated licenses. Other partners include 1xBet and iGamingPlatform, ensuring that everything is in working order.