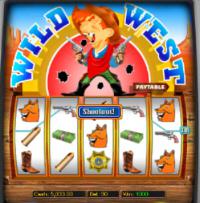 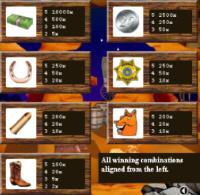 Wild West is a 5 reel, 9 payline slots game and uses the 'game within a game' feature for their bonus round. This coin denomination is fixed at 10¢ and you can place a maximum bet of 10 coins per line.

The bonus feature is triggered when three or more guns show on anywhere on a payline. Once triggered, you will go to the big shootout! You choose a bandit from a lineup of possible suspects and you win the amount attached to the target. You don't have to have any special shooting skill for this game, it's pretty simple to aim and fire.

The hard part is in finding the right one! I won several really nice amounts on the bonus round. I never saw any really low numbers; of course there was always one that was much better than the others I never felt slighted by the amount I did win.

If there were three guns on more than one payline, I still got just one shot but the winners were larger for that bonus round.

I like playing this game! If you're looking for a rootin' tootin' time, aim for the Wild West! 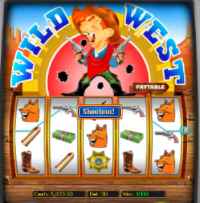