Amatic Industries is a casino game development company that has been around since 1993. They have their headquarters in Austria, and while they are primarily known for their atypical approaches to land-based games (like video roulette terminals), they also have a number of forward-thinking releases for the online casino market. They are a part of the generation of developers who don't care about getting exclusive content deals, and they're happy to get their games in front of players with a variety of operators.

One of the most important things about their online-facing developments is that they have focused exclusively on the HTML5 platform. In a time when many providers are still releasing games in the Adobe Flash format, Amatic knows that Flash has been steadily losing support for a long time, and HTML5 is the format of the future. Along these lines, their focus on HTML5 shows that they are very serious about having a future in the industry and that they're willing to do what it takes to get ahead of the curve. 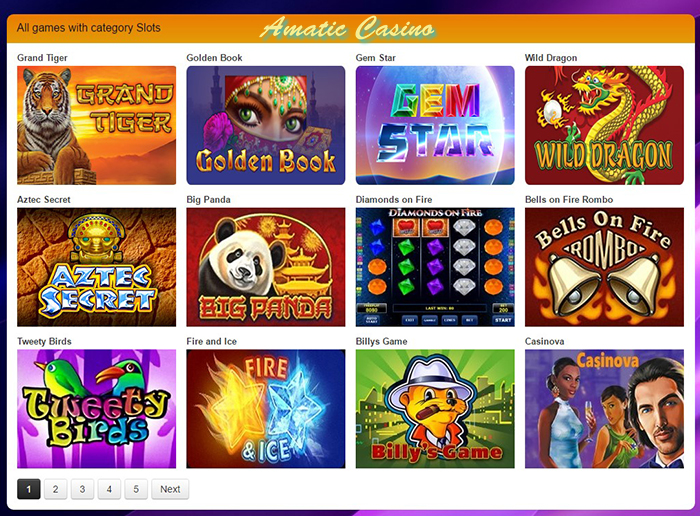 Most of their focus has been on online slots. They focus almost exclusively on video slots, and while these games have some pretty typical themes overall, they have above-average graphics and solid gameplay. While Amatic probably isn't going to win any awards any time soon for having the best games out there or the most games compared to the competition, they definitely have their place alongside a number of other providers with smaller portfolios when it comes to filling out the overall game selection of an online casino. In this capacity, they do extremely well.

This software provider has a bit of an advantage in that they can pick and choose which of their land-based titles performs the best before converting it into an online slot. This means that they can focus on the quality of their online game expansion instead of the quantity, which is the right strategy for the current era of online casino games. There are some titles that just don't translate well to the online environment, regardless of their land-based success, but those are few and far between, and Amatic is very good about taking all of the different factors of a game's success into consideration before switching them over to the HTML5 platform.

As far as land-based software providers go, Amatic Industries has done some really interesting things to set themselves apart from the crowd like multi-player video roulette games and other titles. However, their online slots selection is what they're most known for on the Internet. They got a bit of a slow start with their online games initially, but they've steadily expanded into more operators and more software platforms over time. How this expansion will continue is anyone's guess because their primary focus is still on land-based titles, but that could change at any time.