Titans of the Sun Hyperion

Titans of the Sun Hyperion has not been rated yet. Be the first to rate it! 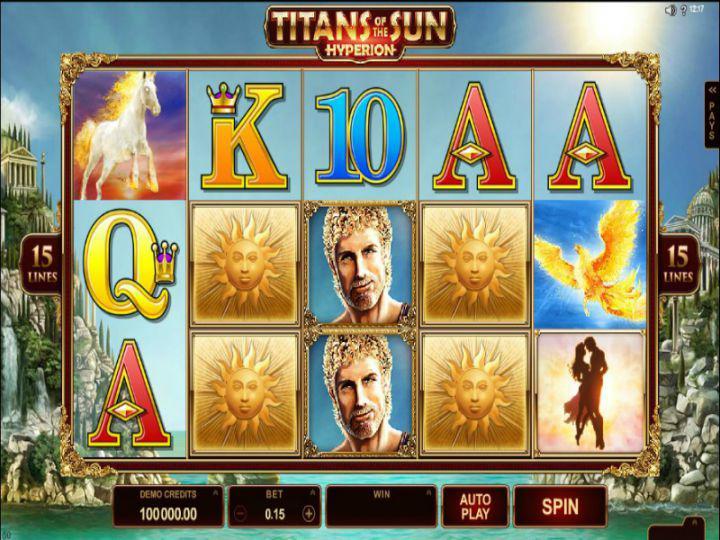 In Greek mythology, there are various classes of gods. On the most basic level, you have the titans and you have the Olympians. The Olympians are the most well-known gods known to be led by Zeus (including his brothers Hades and Poseidon), and the Titans came before them. Hyperion is the son of Gaia and the uncle to Zeus (Gaia being Zeus's grandmother), and he's known as being the father to the sun and the moon. This is the key premise to the Titans of the Sun: Hyperion online slot.

Basic Format of the Game

For this game, you're looking at five reels and three rows and 15 paylines. This is a pretty normal arrangement for video slots these days, and wins go left-to-right only. Coins go from $0.01 to $1.00 apiece, so you have a pretty straightforward betting range of $0.15 to $15 per spin. The reels are transparent, and they give players a view of water and ancient buildings on a Greek coastline.

The top payouts in this game are centered around the symbols that are related to the title character Hyperion. Hyperion himself shows up as a stacked symbol on all five reels. The fiery horse and bird symbols are the other two top pays. Five of Hyperion gets you a 2,000x win, and five of the horse pays 1,000x. It drops down to 500x for five of the bird. What's important to note here is that these top symbols all pay pretty well, and there isn't a sudden drop off in pays, which makes the whole pay table a bit more balanced.

The Titans of the Sun symbol is wild in this game, and it will give you a whooping 5,000x win if you get five of them on an activated payline. This is the highest normal pay in the game.

It's worth noting that the A, K, Q, J and 10 symbols round out the lower end of the payout schedule. All of these lower symbols have small to medium payouts, but they hit often enough that the volatility doesn't seem to be too out of hand.

The golden son symbol is the key to an extremely important feature in this game that drives most of the actual gameplay. This is a cool feature we haven't seen from anyone but Microgaming so far, and it offers chances for huge multi-line wins.

The way this works is that the golden sun symbols are stacked on each spin. A symbol is randomly chosen for each spin, and all of the golden sun symbols turn to that randomly-chosen high or low symbol. This means that you get an extra stacked symbol on each reel for every spin, and that symbol is chosen at random, so it could be anything. The exception is that it can't be a scatter or wild symbol during the regular game.

The scatter in this game is Hyperion holding his wife (and sister) Theia. Pick up five of this symbol for a 100x win on your entire bet (the same size as a 1,500x line bet win), or pick up three or more for a set of 15 free spins. These free spins can be re-triggered, but the real excitement comes from what this does to the stacked mystery symbols.

During the free spins, the stacked mystery symbols can include the wild. This means that you could end up with stacked wilds all over the place, and this could lead to some absolutely enormous wins.

The bottom line is that the Titans of the Sun: Hyperion game is a great example of what goes into making great Microgaming Slots. They have some solid features that give a ton of value and keep the pace of the game up while providing a solid visual experience. This game might not win any awards on its own, but it's definitely above-average in every sense, and it'll offer a lot of players a lot of fun because of how the stacked mystery symbols keep the gameplay exciting.

Top rated casinos to play Titans of the Sun Hyperion