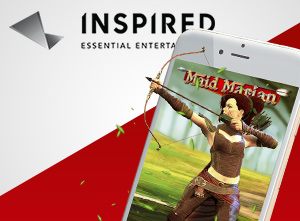 Content, technology, hardware, and solutions. That is what Inspired Gaming is made of, or at least what it makes. The company is not widely known to the gaming audiences, but they do run a pretty big gaming machine in the background. Thanks to the multitude of operations, they are one of the big players in the field of iGaming.

The company seems to have offices in every corner of the world.

Producing slots is only part of the portfolio, with lottery games, betting solutions, and even social gaming and land-based terminals playing a large role as well. Their games are playable in tens of thousands of locations, and in hundreds of online casinos. One advantage of their land-based products is that they have proven to be quite popular, and are finally available for the wider online audiences.

The transition from machines and cabinets into online slots is never an easy job. There are many pitfalls to be avoided, and a great deal of modernization that needs to be done to bring the games to live in new platforms. Part of this is done by third-party studios, as is the larger trend in the industry.

Quite a lot fall to the company’s own teams though. So far, they’ve done a pretty good job of converting the tested classics, and building new games from scratch. Mobile gaming plays a big role in this, and the interface is as modern as it gets. Likewise, the graphics, sound effects and such have received an update to bring the games to the new era. So far, so good.

Online slots remain just a part of the collection. Inspired Gaming is one of the rare companies to offer virtual sports, a product that has proven quite popular in traditional settings. Their cabinets and machines, of course, stand out, forming the backbone of their operations. There is little information about the lottery services, though it seems like these are mostly centered in the UK.

Then there is the whole virtual server network the company operates. This forms the structure upon which all their games are linked, especially the progressive jackpots. This sort of technical knowledge probably explains why the company made the jump into the online arena without a hitch.

The company is present in 35 different gaming jurisdictions. They hold a license from the UK Gambling Commission and the Alderney Gambling Control Commission.

Though there is not much information available on the team of third-party developers, we do know that there are some smaller companies that work for Inspired Gaming. More interestingly, the company has also acquired some bigger parts. For example, Novomatic’s operations in the UK were purchased by this company. Likewise, they have acquired rights for different sports, meaning that their virtual sports catalog is about to expand.

It seems like right now the company is stepping up to enter the markets at full force.