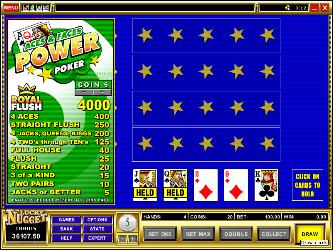 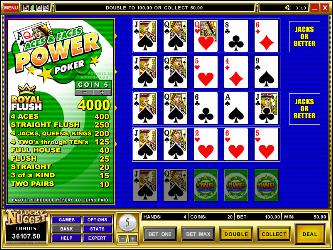 Aces & Faces is one of the most popular of the video poker games and now you can quadruple your fun! It's based on a standard poker game with no wild cards but has the added attraction of 'four of a kind' combinations.

This video poker game pays on pairs of Jacks, Queens, Kings and Aces, two pair, three of a kind, straight, flush, full house, four 2's through 10's, four Jacks through Kings, straight flush, four Aces and a Royal Flush with the highest payout of 4000 coins for each Royal Flush.

On the deal you get 5 cards face up (called a decision hand). This will be displayed on the bottom of the card grid. You hold or discard to make the highest winning hand from these 5 cards.

You have the option of doubling up your winnings, but experts do not recommend this.