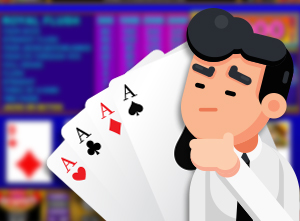 Aces and Faces Video Poker is played with a with a standard deck of 52 cards. Five cards are dealt in the first hand. Hold as many cards as you want to build the strongest hand. The remaining cards will be discarded and replaced with new ones from the same playing deck.

Aces and Faces Video Poker is a standard video poker game based on Jacks or Better play. As the name indicates, the payoffs on this game are tied to combinations of face cards and aces starting with a pair of Jacks and has higher payouts for 4 of a kind combinations in Aces, Kings, Queens and Jacks. There are no wild cards in the game.

A lower payout is set for pairs, straights and flushes with higher payouts given to 4 of a kind combinations so you should look toward any 4 of a kind but the Aces and Faces carry the most payout.