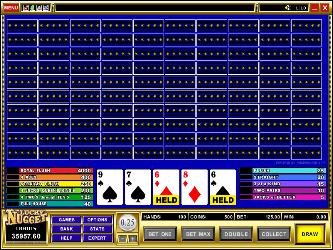 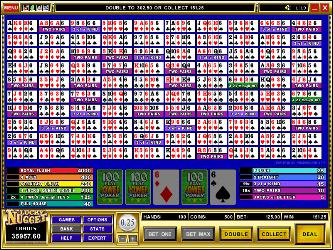 A favorite of the video poker playing public, Aces & Faces is based on a standard poker game with no wild cards but does offer several 'four of a kind' combinations.

In this version you are playing 100 hands.  The game pays on pairs of Jacks, Queens, Kings and Aces, two pair, three of a kind, straight, flush, full house, four 2's through 10's, four Jacks through Kings, straight flush, four Aces and a Royal Flush.

On the deal you get 5 cards face up (called a decision hand).  This will be displayed on the bottom of the card grid.

You hold or discard to make the highest winning hand from these 5 cards.  When you click on draw, the decision hand will be shaded out and one hundred hands of 5 cards will be dealt, each hand uses a separate deck and each hand contains the cards that were held in the decision hand.

You are then dealt the remaining cards to complete each hand from the separate decks.  Each hand pays out the highest combination.  If you are dealt and hold a pair of Aces on the decision hand, this same pair is held on all hands.

You'll be paid on the highest winning combination but because you held a pair of Aces, which is a paying combination, you are assured of receiving payout on all 100 hands for at least a pair of 'Aces'.

Double Up is offered on all winnings, but most professional players don't utilize it. 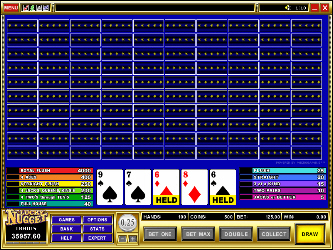