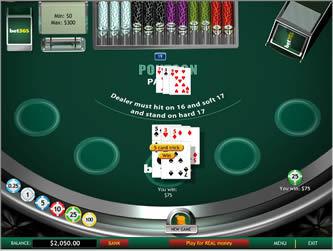 Pontoon is like Blackjack’s stepbrother-close enough you know they are distinctly related, but having enough differences to make you wonder who the father was.

Pontoon a la Playtech is a great spin on the game of 21-you’ll have just as much fun figuring it out as you will really playing it.

The game itself is simple-get as close to 21 without going over. It’s a two-card game between Player and Dealer, but the Dealer doesn’t show any cards until you are done with your hand (although he’ll check for 21).

Here is a rundown of the general rules, which look nothing like the list we outlined on Playtech’s main blackjack page:

There are two ways to absolutely win in Pontoon: a two-card 21 total (called a Pontoon, it’s an Ace and a 10-value card) and a 5-card trick (shown below, it’s when a player holds 5 cards without busting, regardless of value).

Both pay 2 to 1 odds, but in a match-up, a Pontoon will take all. A score of 21 using a number of other cards (and not five) will pay even money.

If you’ve never played Pontoon before, Playtech does a great job of presenting the game. Try it for yourself at one of our recommended Playtech casinos.