New Customer Offer. T&C's Apply. 18+. Free Spins are only available on Book of Dead and are worth €0.10 each. Min deposit: 10 €. The Casino Welcome Offer must be activated within 14 days of joining. After that, you have 7 days to wager your offer and claim your reward. Play Responsibly. LeoSafePlay.com 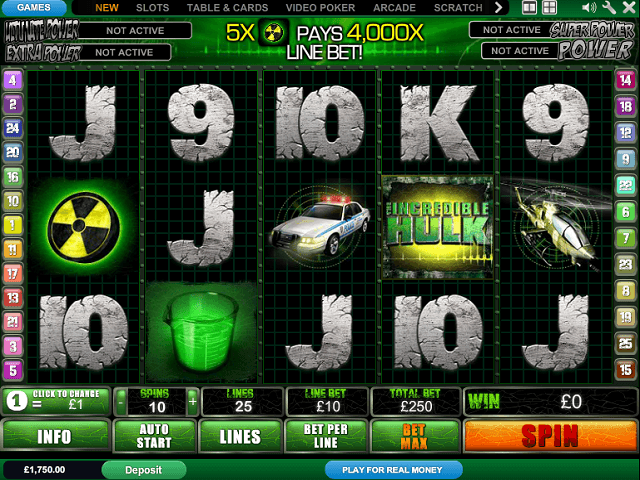 It will be hard to pry yourself away from The Incredible Hulk online slots wagering and all the features it offers; with a range of adjustable coin sizes from 0.01 to 1.00 credits and the choice of 1 to 10 coins per line. The hulky minimum bet is 0.25 credits per game while playing all the lines and the bulky maximum bet is 250.00 credits.

All The Incredible Hulk slot symbols will play and pay out from left to right, except for the hulk Scatter which can play anywhere and the smash bonus Scatter. This Hulk game also has the Marvel Multi-Level Mystery Progressive Jackpot which can be won at the end of any spin (game), and is explained in more detail at the bottom of this review.

Out of the ten paying symbols in The Incredible Hulk slots, the picture symbols will have animations; like the cop car, helicopter, radioactive potion, and the radioactive sign, and all you'll need is two of them on a paid line to get coins back (from left to right of course). The radioactive sign symbol pays the highest with five on a line, 4000 coins.

I've gotten the center expanding wild several times while playing this game, but wasn't lucky enough to get the three center reels to expand, though I did get a few free game features.

The Incredible Hulk slots Smash Bonus game is triggered when the Smash Bonus symbol appears anywhere on reels 1 and 5 at the same time. Once the bonus is activated, an instruction screen will appear followed by the bonus game with a possible 2 rounds:

Players may get more selections in one or both of the bonus game rounds, when; more than three scatters have activated The Incredible Hulk bonus round.

The Incredible Hulk slots Progressive Jackpot game can be triggered at any time at the end of any game. The game instructions claim; "The higher the bet, the bigger the chances of entering the jackpot game." Once the progressive jackpot game is activated, the following will occur:

If you're lucky enough to play The Incredible Hulk slot progressive jackpot game, you could win hundreds, thousands, or over a million credits!

Play The Incredible Hulk slots and earn extra coins during its bonus or free games, or even hit the progressive jackpot game and possibly retire!