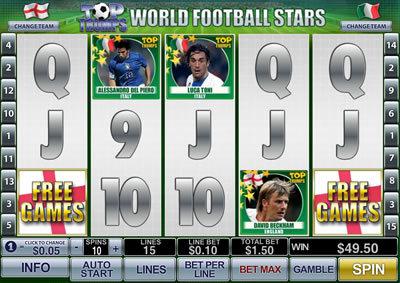 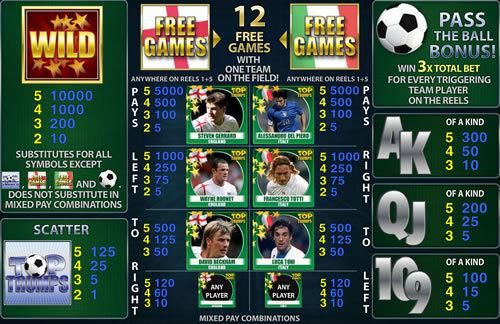 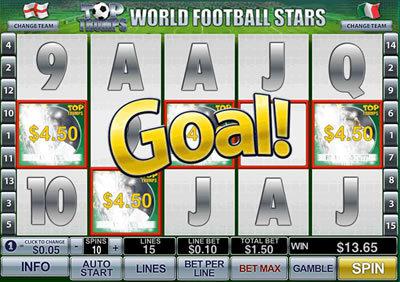 It all begins with choosing a coin size from .01 to 5.00 credits. We always recommend playing all the lines, and once you decide how many coins youd like to play per line, from 1 to 10 coins, youre all set. Wagers on a 15-line bet will range from .15 to 750 credits per game.

Top Trumps World Football Stars slot faces on the symbols may change with the team selections, but their values will remain the same, paying anywhere from 5 to 5000 coins when 2 to 5 symbols hit an active payline.

Keep in mind, the action is coming from both sides of the reels in this video slotand sometimes both waysso you have several chances to make winning combinations.

Also keep in mind that you can also make Mixed Combinations for payouts, meaning that if several players land on an active payline, a payout will be awarded regardless if the teams dont match. Wilds do not contribute to Mixed Combinations.

Top Trumps World Football Stars online slots Gamble Feature can be used; every time you are awarded a payout, you have the option to select Gamble, which will launch a new screen. A game of High-Low ensues, with a variety of options to help you escape with not only your dignity, but hopefully more money.

It wouldnt be a Playtech slot machine if it didnt feature a way to gamble your winnings for a chance at something bigger.

Top Trumps Logo Scatter payment is based on the total wager and spans from 1x your wager (with 2 symbols) to 125x your total wager (with 5 symbols). Placement does not matter; quantity does.

At that point, the ball is passed between all of the respective team member symbols currently on the reels. The more players the ball touches, the higher the payout; each time the ball touches a player, 3x the total wager is awarded.