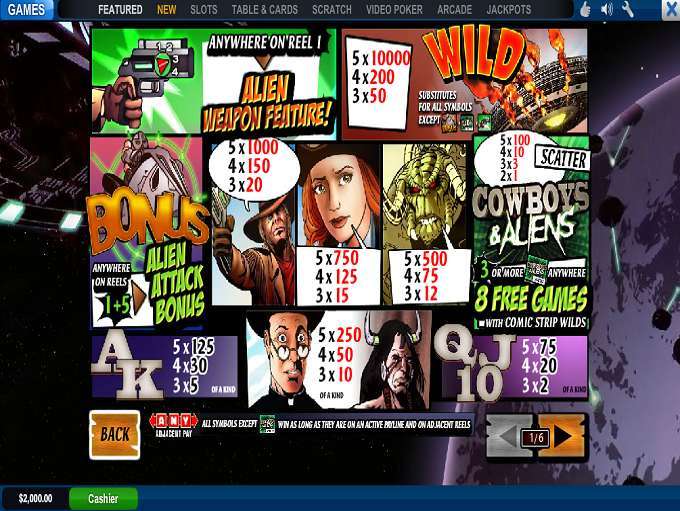 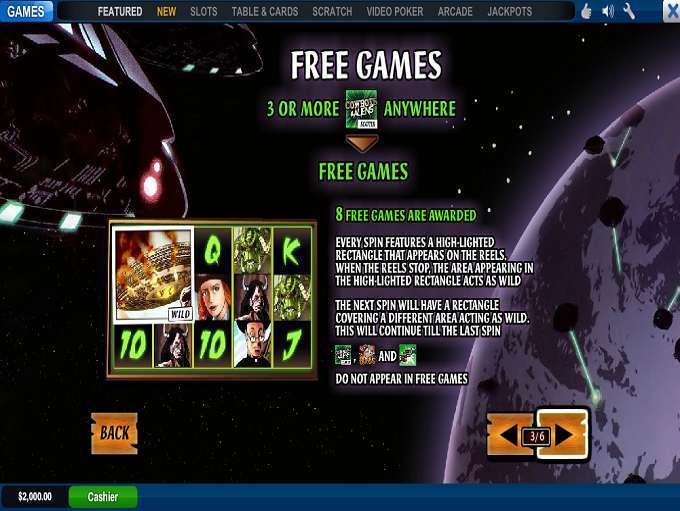 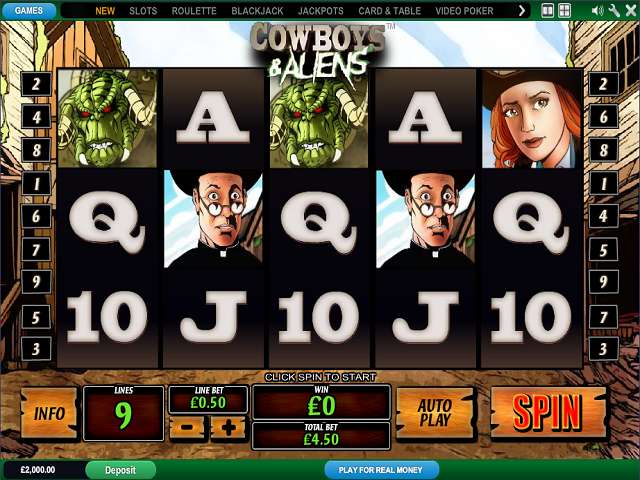 Cowboys and Aliens slots have 5 reels and 9 paylines with any-way pays, wilds, and three features, including a bonus game, free games, and a wild feature. Plus a lot of crazy, out of this world, action!

Cowboys & Aliens slot runs on Playtech software and appeared at online casinos in December 2012. The game may have only nine lines, but it packs a punch with all of its features and two-way payouts.

The Cowboys and Aliens slot game has a unique Auto Play feature, for hands-free play just hover the cursor over the button and select up to 99 games, or until a feature is triggered.

There’s also a “Stop” button that allows you to stop the game.

Is packed full with 14 symbols. Payouts are awarded when three of the same symbol appears on adjacent reels and on an active payline. Only one symbol, the scatter, will award a payout when only two appear.

Is the burning Alien Ship “Wild” symbol, and it can appear on all five of the reels:

There are three scatter-type symbols in the game, the Alien Fighter “Bonus” symbol, the Cowboys & Aliens “Scatter” symbol, and the Alien Pistol symbol; each one will trigger a unique feature.

Is triggered by the Alien Fighter “Bonus” symbol appearing on reels 1 and 5 at the same time. A second scene will appear with three characters; Verity, Indian Warrior, and Zeke, along with their fighting skills:

There are a total of three rounds during the Alien Attack Bonus. If you make it through the first round, without using up all the shots, you may get an extra amount of shots added. The same thing goes for round two. Destroy all the ships in all three rounds to receive a bonus.

Is triggered by three Cowboys & Aliens “Scatter” symbols anywhere on the five reels:

Is triggered when the Alien Pistol symbol appears anywhere on Reel 1:

Cowboys & Aliens slot: What is the first thing that comes to mind? Cowboys verses Aliens, right? Well, after playing the bonus game, one would think it would be cowboys and Indians verses aliens.

Play Cowboys and Aliens slots to help the cowboys and Indians take out the aliens, and walk away with the cash!