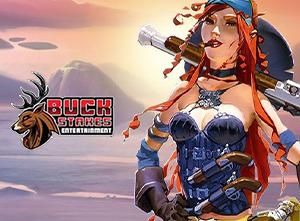 Buck Stakes Entertainment has one of the most beautiful logos among the software providers of online casino games. Inspired by the South African native buck, it perfectly reflects both the name and origin of the company, suggesting an immersive experience able to rival amazing African wildlife that leaves no one untouched.

Stormed into the world of iGaming in 2021, this studio leverages the latest technologies and the rich expertise of its team to create highly entertaining premium slots. Still at the very beginning of its journey to the top, the brand cannot brag of a loaded portfolio but one thing is for sure: people from Buck Stakes have ambitious plans.

They debuted on the crowded scene of online entertainment with a bang, introducing nothing else but a Megaways™ title, jam-packed with innovative extra features. How have they managed to come so far? Read on to learn the details and find out more about this up-and-coming software developer.

It’s no secret, the highly competitive gaming sector doesn’t make things easy for newcomers. Well, unless they don’t have a strong backing in the face of a company that belongs to the cream of the crop. In the case of Buck Stakes Entertainment, we’re talking about Microgaming, an Isle-Of-Man giant that has been at the forefront of online casino technologies since 1994 and in October 2020 penned an agreement with BTG for the use of Megaways™.

Buck Stakes is one of the independent studios that deliver exclusive content for “the father of slots” who, by the way, also pioneered mobile casino, launching its first software for small screens in 2004. BSE signed a deal with Microgaming the same year it was officially established and today, it keeps company with Triple Edge, Stormcraft, Fortune Factory, Aurum Signature, and other studios that are part of the state-of-the-art network.

Needless to say, the launch of the very first online slot designed by the Durban-headquartered studio was hardly possible without the aforementioned partnership. 8 Golden Skulls of Holly Roger Megaways went live in April 2021, bringing plenty of fun and excitement to players all over the world thanks to a huge number of operators that receive content from Microgaming. And that was only the beginning.

Buck Stakes Entertainment chose Megaways™ over all other types of reel mechanics, and for a good reason. The popularity of this unique engine is growing constantly, among players and software developers alike. More and more studios decide to license it from Big Time Gaming in order to introduce punters to their versions of spinning adventures able to generate between 64 and 117, 649 ways to win.

The studio that is the subject of this review didn’t experiment with less complex mechanics and standard 5x3 grids, cutting straight to the chase by launching pirate-themed 8 Golden Skulls of Holly Roger enhanced with Megaways™. Well, the latter is a bit different story from the one shown in the Pirates of the Caribbean movies inspired by the life of Jonh Ward. Apart from a tremendous number of lucky combinations, this online slot also boasts an impressive package of extra features, including Rolling Reels™, Firepot™, and, of course, free spins with multipliers.

The next game to hit the virtual floors of online casinos is 4 Diamond Blues Megaways™, which is set for release in September 2021. Although not much is known about this story yet, all the indications are that it will deliver thrills and rhythm of well-beloved lucky red sevens, golden bars, four-leaf clovers, and, of course, sparkling diamonds.