Operating since 2011, Big Time Gaming is an online casino software provider that focuses largely on high-quality slots. Their headquarters is in Sydney, Australia, but they have licenses in several different jurisdictions. Their list of jurisdictions where they have licenses includes the United Kingdom, Malta, Gibraltar and Alderney. These are all extremely well respected locations to be licensed, and the fact that BTG has all four of them speaks volumes about the image that they are trying to have in the industry of being extremely fair, secure and reliable.

The list of table games from Big Time Gaming is fairly limited. They do have online blackjack and roulette games that they have developed, but that's about it. The reason for this is that most online casinos already have several versions of these games available, and what tends to bring in more players is the slot offering. While some players might see this as a sad state of affairs, the reality of the situation is that they have to cater to what the market demands. 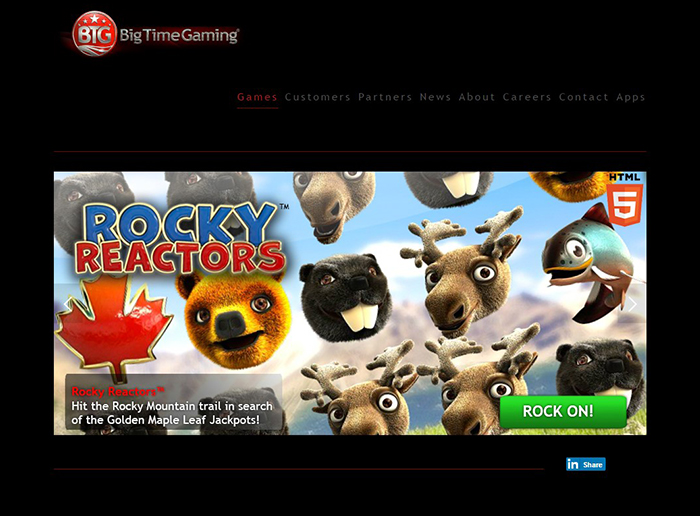 The selection of video slots from BTG is pretty impressive in terms of quality. Though they don't have the largest selection of games out there, they don't have to because it would be fairly difficult for them to get an exclusive content deal with an operator in the first place due to the nature of the industry. Online casinos want to have games from multiple software providers, so Big Time Gaming is able to just focus on high-quality slots and beating the competition on the quality metric.

The thing that probably stands out the most in their game selection is their Megaways line of games. These titles have six reels with seven rows of symbols, and they play in "all-ways" formats to give players thousands of ways to win on every single spin. What's more is that virtually all of the symbols frequently show up stacked in sets of two, three or more, which leads to massive multi-line wins and multiple payouts on the same spin on plenty of spins. You'll also see full-reel, stacked wild symbols with multipliers and all kinds of goodies that ramp up the already impressive hit-rate.

Big Time Gaming has a great approach that fits in well with how the industry operates these days. Instead of having to compete with other providers based on producing a high quantity of games, they're able to produce based on quality. Their content distribution deals put them in a position where they're able to have their games listed side-by-side with several of their competitors at online casinos, and this gives them a big chance to show off how good their games really are.

Many software developers, in the online slots space in particular, have tried to break away from the normal slot layouts to get attention for themselves. Some people see this as a cheap tactic because it rarely works out as a result of low-quality games being produced in the first place. However, BTG has been able to make their Megaways games work extremely well because they focus on giving players a great overall experience regardless of the fact that they are using an extremely atypical game layout for them.