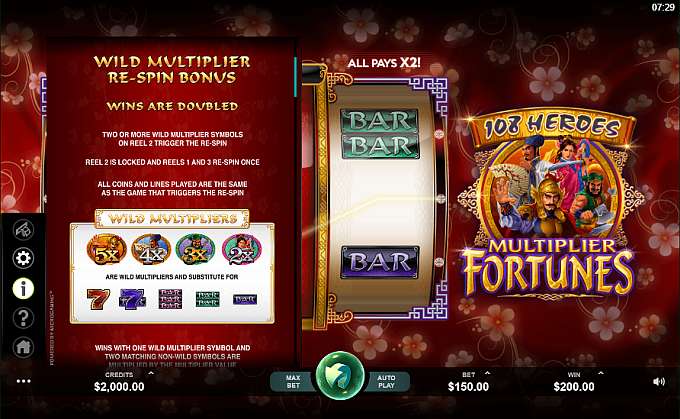 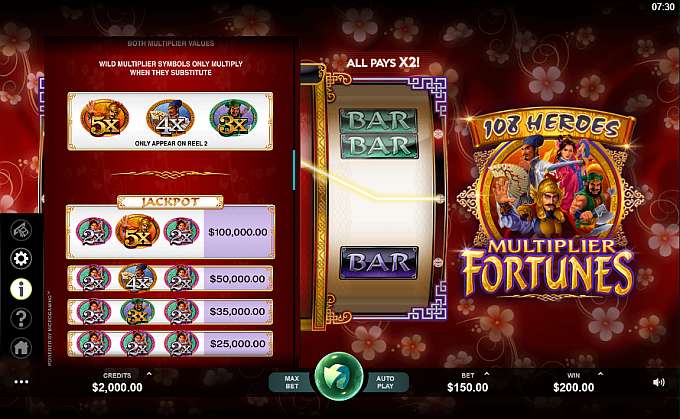 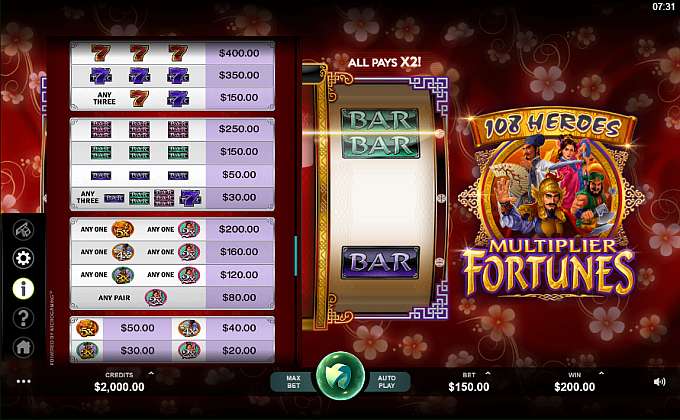 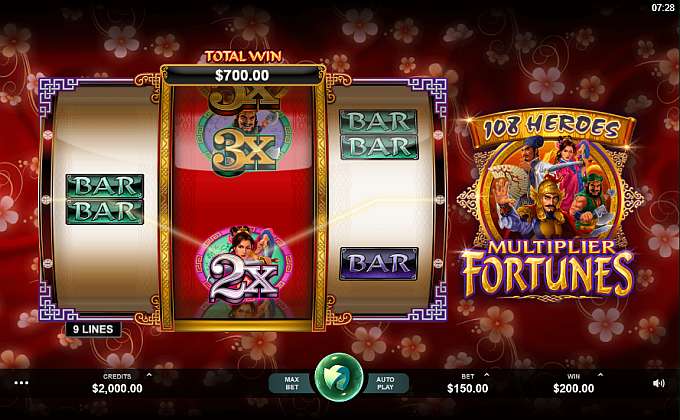 The game 108 Heroes: Multiplier Fortunes is available on the Microgaming Quickfire platform and was actually developed by Triple Edge Studios. It's based around a set of heroes that are styled around the Middle East to Far East in a somewhat medieval time, and it has a tremendous visual appeal that cannot be denied. The gameplay is also excellent considering that this is a three-reel game, and they have really maximized what we think can be done with this limited amount of screen real estate. As such, this title plays more like a video slot than what people typically think of for games in the classic-style genre.

Format and Layout of the Game

There are three reels in this game, and you have three rows available as well. There are nine total paylines here, and they all go from left to right, but something you need to realize before you start playing this game is that it uses the older classic slot idea of there being blanks on the reels. This increases the volatility a bit, which is something you should look out for.

You'll also be playing for 15 coins on each spin with no option to change how many paylines you're playing with. Coins can range from $0.01 to $1 each, and you can multiply your total number of coins being wagered by a factor of up to 10, so the minimum bet size is $0.15, and the maximum is $150. That's a pretty wide range, so you won't have to worry about missing out because of wager size issues for sure.

Since bets in this game are based on multiples of your bet size, we're going to assume a wager size of $1.50 per spin. If you play for more or less, then you'll need to scale the prizes accordingly.

There are four wild multiplier symbols that can give you 2x, 3x, 4x or 5x. They substitute for all of the regular symbols in this title, and they multiply the size of winning combinations accordingly. They also stack to give you bigger wins, which is the source of a tremendous amount of value for this title. You'll find that the 2x is the only one to show up on the first and third reels, and all of them show up on the middle reel.

Players can earn a re-spin feature by getting two (or three) of the wild multipliers on the second reel at the same time. If you do this, the payouts are given normally, and then the second reel is locked into place while the first and third get an extra spin at no cost for extra chances at winning combinations. This is a fun variation on a common type of bonus round that fits this game perfectly.

There are four winning combinations that you can get with three of the wild multipliers, and they differ based on which one is in the middle since the 2x will always be on the first and last reels. For the 5x, you get a 1,000x prize, which is the largest jackpot in this game. The 4x earns you a 500x payout, and the 3x wild multiplier in the middle earns 350x. You will be given 250x for three of a kind of the 2x wild multiplier symbols as well.

Three of a kind of the red seven pays 4x, and it's 3.5x for three of the blue seven/bar symbol. Any mismatched combination of three sevens earns 1.5x as well. The triple, double and single bars will get you 2.5x, 1.5x and 0.5x for three of a kind, respectively. However, any mix of bar symbols, including the blue seven bar, pays 0.3x, which helps to bring down the volatility a bit.

108 Heroes: Multiplier Fortunes is the type of slot that breaks out from what you think of as being normal, and in this way, it steps "outside the box" without having to use some atypical style of format or a weird layout. Instead, it achieves this purely from a position of strong gameplay and a lot of ways to win, and that's exactly what we like to see. Even if you tend to only prefer five-reel games, you may want to try this game out just to see how it fits you.