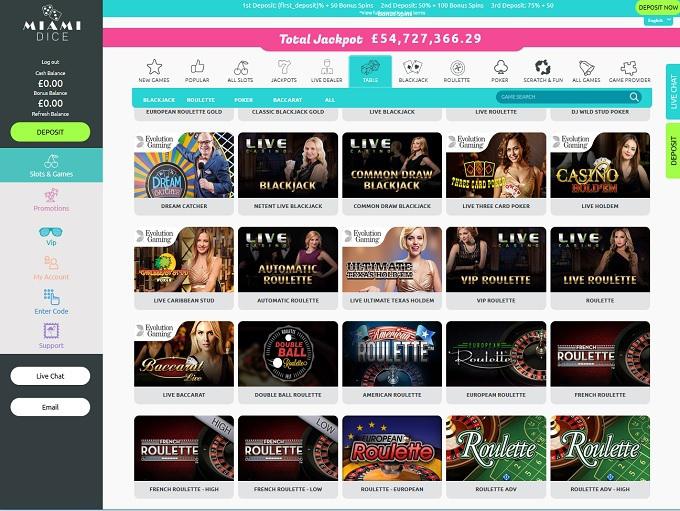 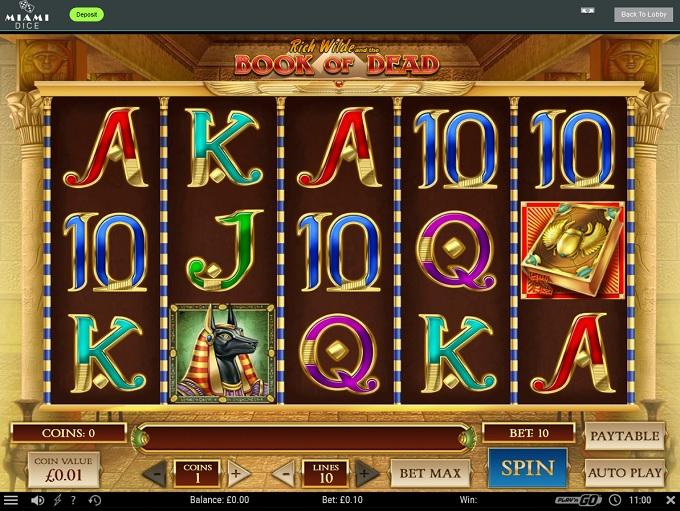 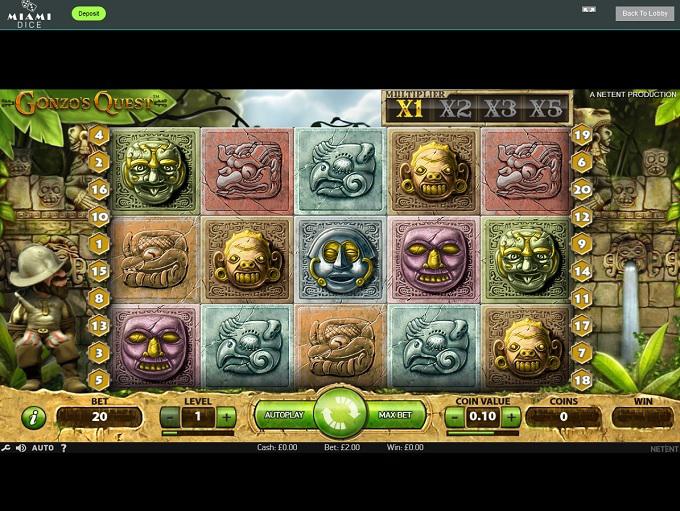 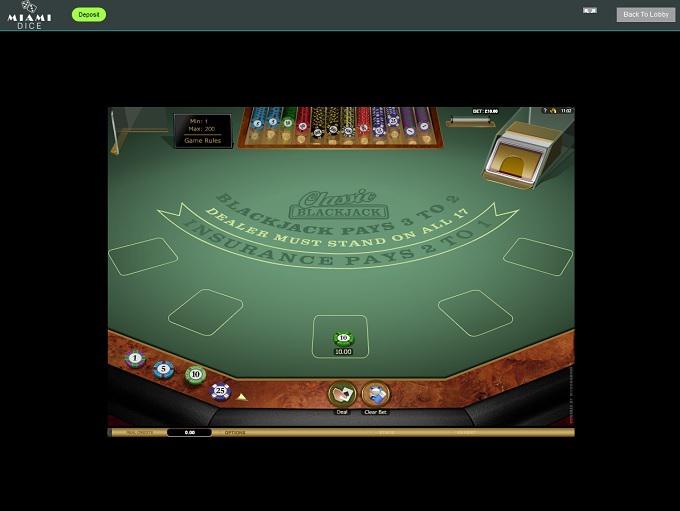 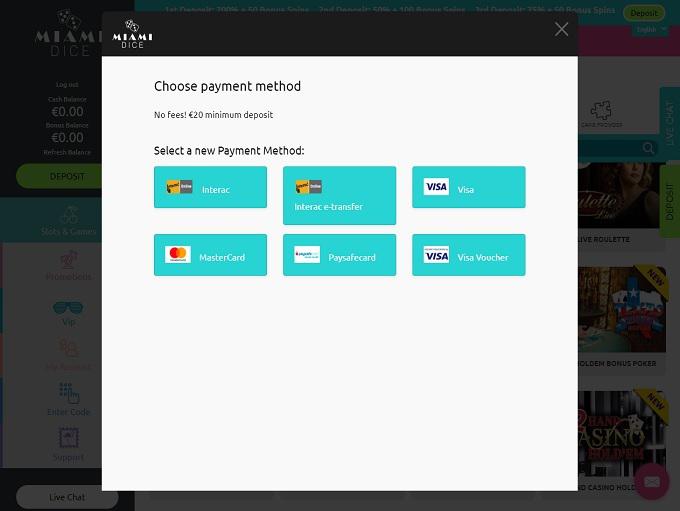 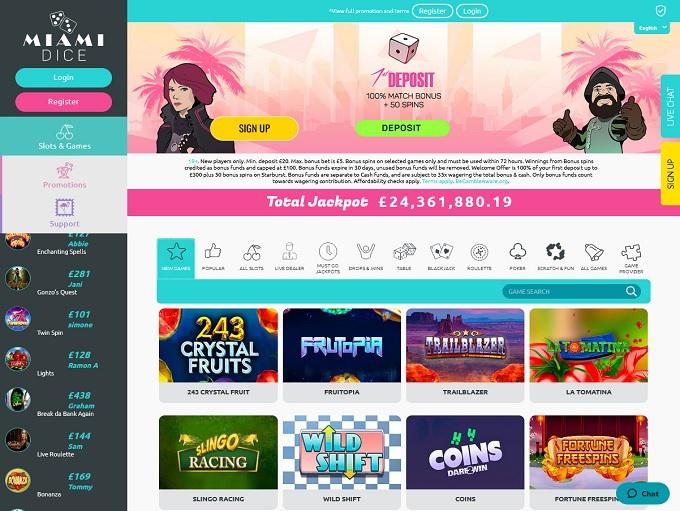 Miami Dice Casino is an obvious play on the Miami Vice television series and movie, and it has an appropriate theme with a hot Miami night club type of vibe in the 1980s. This is a fairly atypical theme, which makes it stand out, and it will help you to get into the mood of getting in on the action as soon as you land on the scene. They are licensed in both the United Kingdom and Curacao, and it's this UK license in particular that gives us peace of mind in recommending this casino in spite of it having only opened in late 2016.

The software used at this casino starts primarily with Net Entertainment. From there, you'll get titles from other providers like Leander Games, NYX and Blueprint Gaming. All of their games work from within a web browser, so you can use any kind of computer to connect and play regardless of whether it uses the Windows, Mac or Linux operating systems.

In addition to this, there's a significant mobile offering as well. Along similar lines as above, everything is web-based, so you can play from a variety of operating systems on a variety of smartphones and tablets. Devices that use iOS, Android, Windows Mobile, Blackberry and many other operating systems can be used here. It's a good variety of different types of devices, and this helps them reach a really wide range of players.

The selection of slots here is pretty solid, and the core group of games in this genre comes thanks to Net Entertainment. This casino has their entire portfolio of titles, and this even includes the world record-breaking Mega Fortune, which held the record for the largest jackpot in the history of the online gambling industry. There are a number of other progressives and non-progressive slot titles, and it's clear that there is a ton to get excited about here in the slot section. They have a number of classic, three-reel titles as well, but most of the focus is on video slots. This is normal for the industry as a whole.

This online casino is pretty slot-focused, and as such, their non-slot selection isn't the greatest. They have some table games like Baccarat and blackjack along with a number of video poker games, but there's nothing really resembling an extensive selection here. This is definitely a major disadvantage of playing at this casino, and it's something that table game fans should keep in mind before they make an account here. Double check that they have the games that you want because their non-slot selection is relatively sparse compared to what's considered typical for the industry these days. This is one of the only real disadvantages of this site, though for players who only focus on slots, it won't be a big deal at all.

The selection of banking options they have available is pretty good. They have both quantity and quality, including top credit cards like MasterCard and Visa. In addition, you can get in with Skrill, Neteller, Trustly, GiroPay, Dotpay, bank transfers and other options. The exact selection that you have available will depend a bit on where you're playing from, but you'll have plenty to choose from regardless.

Something worth pointing out is that Miami Dice Casino hasn't been around as long as a lot of the competition. For many players, this will mean that they don't have much of a history to go on in terms of getting reliable withdrawals. There are two reasons why we think you will be fine to trust them. The first is the United Kingdom license, which is generally regarded as one of the top places to get licensed in the world. The second is the fact that the company that owns this casino is Imperium Network Solutions, a company that has a good history with plenty of other casino sites paying out when they are supposed to.

You have two major options when it comes to contacting the support team. They have a 24/7 live chat messenger option and an email option. The live chat is the most popular, and it can have you talking to a support team member in moments. The email option gets you a response back in a few hours.

Miami Dice Casino has a fun theme that gets you ready for a lot of action, and they have the popular Net Entertainment slots as the centerpiece of their game selection. We have no reservations about recommending this site to play with because of the company that owns them and their UK license. Overall, it's a solid site to choose if you prefer slots, but their table game selection is limited.