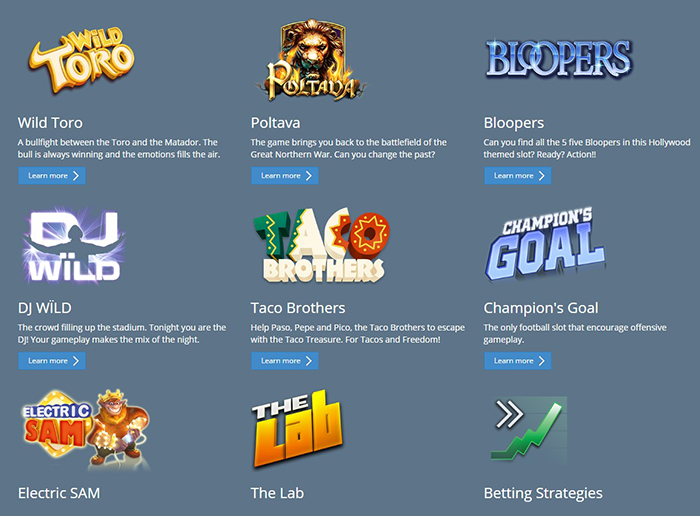 The company officially opened up in 2012. It took them another year before their first game was out. This dedication to quality is what sets them apart from most other game producers. Concept, art, and maths are the three pillars of game design that this developer has built their production model around. And dare we say, it does work quite wonderfully.Elk Studios remains a mid-size company with the a clear aim of simply producing quality gaming content as well as casino software. The company is based in Stockholm, Sweden. The company holds licenses in the three most respected jurisdictions: Malta, UK and Gibraltar.

The best thing is to have quality in quantity

It took a while for Elk Studios to get where it is now. Slow publishing schedule meant that the games came one at a time, usually months apart. For people who had grown tired of one game, this meant that they had to try other publishers.

That is not the case anymore. After several years in the business, the company has amassed a portfolio that is quite spectacular and numerous. The games draw inspiration from history, legends, popular games, and a lot of other sources. As an added plus, they do not go for the low-hanging fruit, instead choosing to use source material that no other company does. Evidence of this is games like Poltava, Ivanhoe, Platooners, and Kaiju.

Besides concentrating on the obvious, such as special features and graphics, the company has also paid attention to features that go beyond gaming itself. This gives individual online casinos the ability to offer bonus and promotions to individual players in the form of challenges(something familiar from video gaming in general). In addition to this, the games also have an in-built mechanism for running slot tournaments with different prizes and rewards to suit the players and the casinos.

Why mathematics matter in slot gaming

Elk Studios pays heavy attention to the in-game mathematics. In fact, it’s one of the cornerstones of their game design philosophy. This is not only evident through different settings that you can choose to play with(betting variation), but through the differences between each title.

This means that the company doesn’t simply reskin games, which further reinforces the attraction of individual themes. A lot of other companies simply changes the graphics and keep the reels, paylines, features, and such same or similar. This results in a lack of variation, which is not the case with this game producer. This is why the company can offer an incredible amount of variety with a much smaller number of games than most of their competitors.