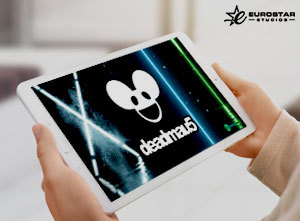 Not just another game studio – that’s how Jerry Seelig and Tara Townsend introduce their brainchild, and no doubts, these are the words players want to hear. A little bit tired of the same themes exploited over and over by many software providers, slot buffs couldn’t wait to see something really authentic, and Eurostar Studios fulfilled their expectations. The very first spinning adventure produced by this developer was electrifying deadmau5, a branded slot launched exclusively across Microgaming’s network of operators.

Founded to deliver distinct and eye-catching stories, this San Francisco-headquartered company leverages Jerry’s rich game design experience and Tara’s knack for business and marketing. Jerry can brag of a more than 20 years long career (replenished with over 1,000 games and 100 patents) in various sectors of the gambling industry, from VLTs to iGaming. In his new role at Eurostar, he is the driving force of a tight-knit squad of talented artists, animators, and audio engineers who turn his vision into vivid reality.

As a graduate of the Wharton School of Business, Tara Townsend is in charge of everything that relates to business including licensing, marketing, and product strategy. Before joining forces with Jerry, she held management positions in totally different fields, working even for fashion houses.

She also had plenty of opportunities to try her hand at gaming and it looks like she found her new role in this amazing and ever-evolving industry. Since partnership-building is on the list of Tara’s responsibilities as well, we can’t help but conclude she is really good at her job, and the deal with Microgaming serves as a great proof of this statement.

Of course, even the most impressive graphics and awesome music alone are not enough to make a hot ticket slot. Hence, as you have probably already guessed, this fruit machine has something more to offer - a solid winning potential and an attractive set of extra features. This 243 ways-to-win release took the best of both worlds and nicely incorporated weel-familiar to punters Microgaming’s Rolling Reels™ and Eurostar’s innovative Drop The Wild™ feature. The latter randomly turn reels 2, 3, or 4 completely wild, delivering a guaranteed win.

It comes as no surprise that the game creators enhanced deadmau5 with high volatility since nowadays, high-volatile slots are the big trend across online casinos worldwide. They also made it affordable as you can start playing with just $0.20 a spin. On the other hand, an imposing maximum bet of $120 is destined to attract flamboyant high-rollers, especially those who like 4Ware, Monophobis, and other music pieces composed by Joel Thomas Zimmerman aka deadmau5.

By the way, playing the role of a wild symbol, the signature ears have magical powers to stack on reels 3, 4, and 5 to boost your wins. And that’s not all because you can also count on universally beloved treats on the house – hit 3, 4, or 5 scatters on the screen and enjoy 15, 20, or 25 free spins.