0%
+ 500 Casino Spins
New Customer Offer. T&C's Apply. 18+. #ad. Min deposit £10, £8 max win per 10 spins, max bonus conversion £250, 65X wagering requirement. Up to 500 Casino Spins. Spin the Mega Reel to win up to 500 Casino Spins on Starburst or Fluffy Favourites. The Welcome offer: You will receive a Casino spin of the ‘Mega Reel’ when you make your first deposit. Prizes vary, ranging from Casino Spins to Amazon Vouchers. The ‘Mega Reel’ is where you will win all your promotional prizes obtained through deposits on the site. You will either be invited to play for FREE or pay a small amount to spin the Reel. After making your first deposit, you can claim a free spin of the ‘Mega Reel’ on each deposit of £20 or more. Amazon vouchers won from the Mega Reel will be emailed to the address registered on your account within 7 days. The maximum amount (for accounts that have made a deposit) which can be converted to your REAL (withdrawable) balance as a result of fulfilling the bonus wagering requirement is £250.
Play 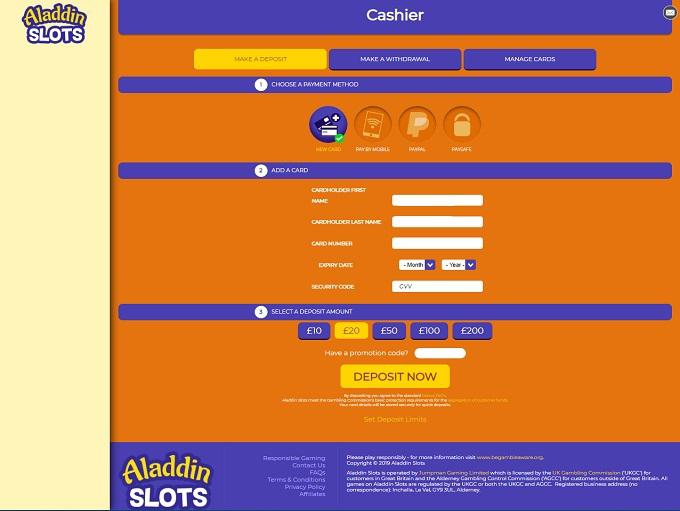 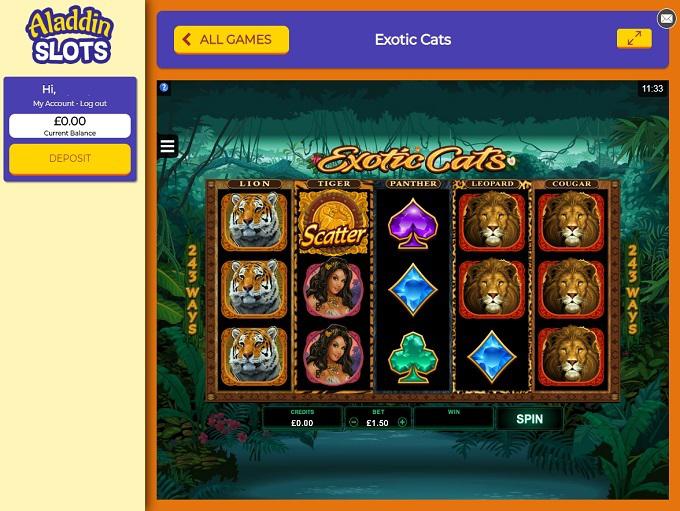 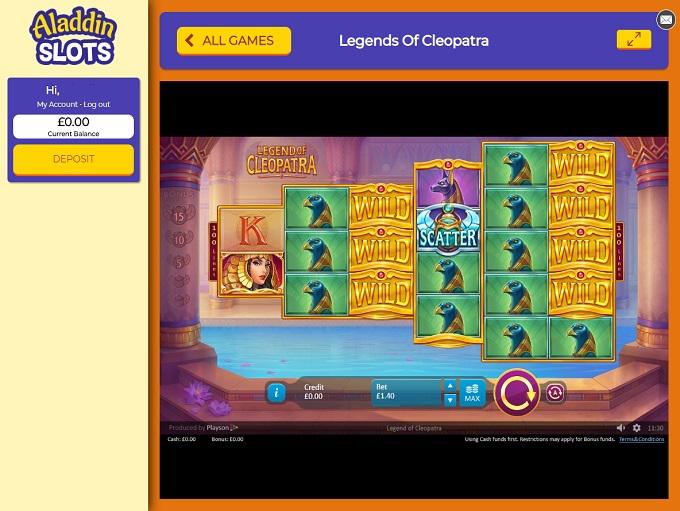 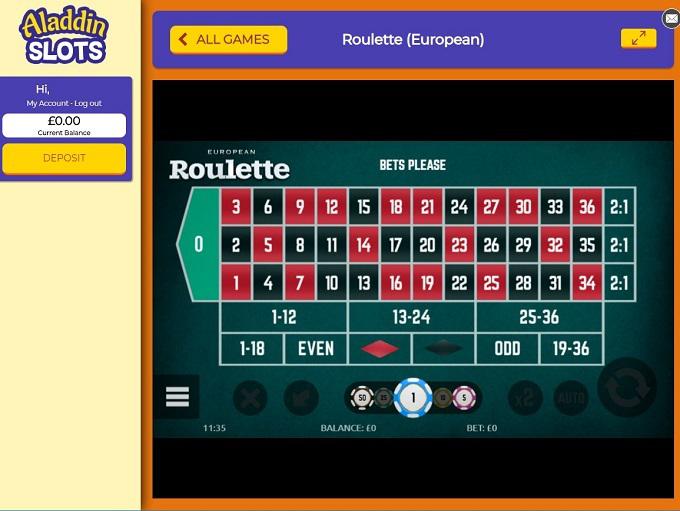 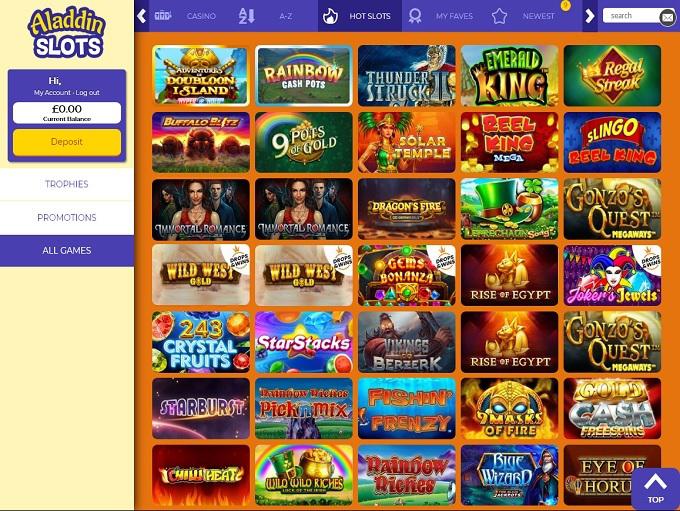 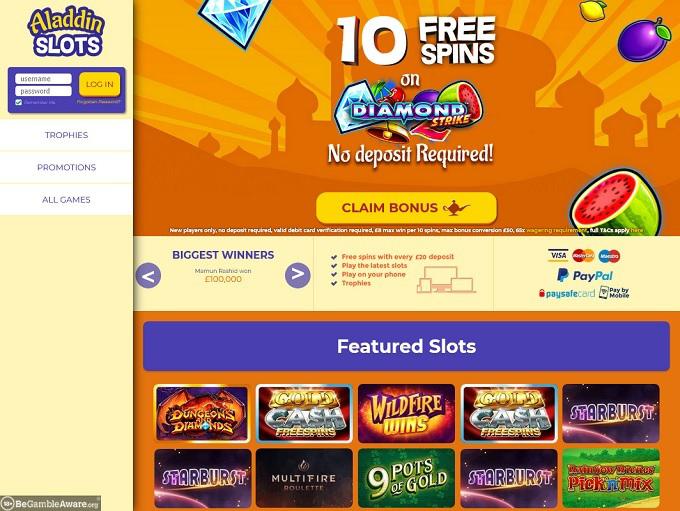 The name Aladdin Slots Casino makes it pretty clear what this site is all about. With that having been said, they have a pretty balanced selection of games from different genres. They've been around since 2017 with licenses from Alderney and the United Kingdom, and they are operated by Jumpman Gaming Ltd. While the UK license in particular is great news, other sites operated by this same company have seen some problems with cash out speed and customer service at times, which means we have to recommend caution.

The main software platform for this casino is based on Microgaming Quickfire, a web-based software that requires no download and that works on both computers and mobile devices. Additionally, they have games from a variety of third-party names like Bede Gaming, Endorphina, Thunderkick and dozens of others. On top of that, the full selection of slots from Net Entertainment can be found here as well, which really adds a lot of value from the perspective of the player.

As we mentioned above, you get two ways to connect. You can use your web browser to play from a computer, and that means virtually all modern operating systems and computer types can be used (Linux, Mac, Windows, etc.) Additionally, both smartphones and tablets are good to go here with Android, iOS, Windows Phone and other operating systems being compatible. There's no denying the level of flexibility found here, and that means that you'll have basically no restrictions on how you can connect to play as long as you have an updated Internet browser program or app and a steady connection.

It's not exactly a surprise that there are a ton of video slot options here. Between the name itself and the fact that most sites focus on this particular genre makes it a bit obvious. They also have plenty of classic slots with three reels too, and their line-up of progressives is pretty strong as well. Mega Fortune from NetEnt and Mega Moolah from Microgaming have each held the world record for the largest online jackpot before, and you'll have an opportunity at all stakes to become a millionaire in a single spin with either of these games. Plenty of different themes, concepts, play styles and graphical approaches are found in their selection.

The table games and other non-slot titles aren't neglected here either. Roulette, Baccarat, craps, blackjack, video poker, casino poker, keno and scratch cards can all be found with multiple styles and variations, and they're presented in a great way with a strong visual appeal. You're not going to be able to trick yourself to think that you're sitting in a land-based establishment, but definitely won't regret playing these games because of the visuals either, which is a lot more than you can say for quite a bit of the competition.

The list of available payment methods for this site is quite small. Maestro, Visa, MasterCard, PayPal and Paysafecard are about it. This is very limiting, and it makes you wonder why they don't at least have Neteller and Skrill on the electronic wallet front.

Something else that's fairly concerning is that their parent company Jumpman Gaming Ltd. doesn't have the best reputation for quick cash outs. While their UK license means you have options in place for arbitration if you don't get paid, it's the type of hassle that you really hope to avoid as much as possible.

No telephone option is available at this site for support, but that won't matter so much to the majority of players. They do have a live chat messenger service, and they also have an email option. What's more is that they offer a WhatsApp option if you have that on your phone or other mobile device, which is very handy if you're playing from mobile.

Again, sites operated by Jumpman Gaming Ltd. don't have the best reputation for strong customer service. While this particular site hasn't been around long enough to build up its own history one way or another, it's not a promising sign.

There are a ton of different options for sites to play with in today's online marketplace, and there's no reason to put up with a sub-par performance from any casino. Aladdin Slots Casino doesn't have a reputation to bank on, but the reputation of its parent company doesn't exactly inspire confidence. They haven't "gone rogue" or seen reports of stealing winnings from players by refusing to pay out, but they don't have a reputation for good customer service or fast cash outs either.

Because of this, we can't blame players if they want to check out our list of other Microgaming Quickfire casinos and find a place to play with the same software and games but a better reputation.