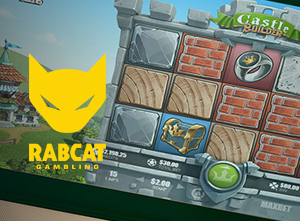 The company is licensed by the UK Gambling Commission, providing confidence in the safety and security of its products.

The exposure of Rabcat Gambling’s products has skyrocketed in recent years, since the studio participates in co-development of 2D art, 3D animations, texturing and cinematics while delivering its content via renowned third-party platforms.

Among its most popular online gaming products are slots, featuring a multiplex of variations in terms of themes and bonus rounds. Titles include games like Legend of Olympus, a state-of-the-art slot machine with superb graphics, 5 reels and 20 paylines, portraying the ancient world of the Olympians.

…there is a crazy bunch of extraterrestrial monsters in Scary Friends, released in 2014. The catalog continues with Penguin Splash, a high diving contest, Castle Builder I and II, Rabcat’s most revolutionary slot releases with innovative, level-based gameplay.

Most features in this producer’s releases are based on increasing multipliers, free spins, wild substitutions, exploding wilds, reel clones, connecting wilds and double wins, although the gamble feature and instant wins are not excluded.

Founded in 2001 as a provider for the international videogame industry, Rabcat established itself as a trustworthy partner over the years and entered the iGaming division in 2011. Since June 2010, Win2Day, a gaming site of Casinos Austria and the Austrian Lotteries, holds 80 per cent of the shares of Rabcat Computer Graphics GmbH.

In November 2011, the company has signed an arrangement with GTS Enhanced Gaming Engine (EdGE), a UK-based technology platform that helped Rabcat integrate its portfolio. In addition, the studio started another landmark partnership with QuickFire and Odobo in 2012, only to launch its most celebrated video slot Castle Builder in 2014. Thomas Schleischitz is the CEO and founder of Rabcat while Emmerich Hager acts as the managing director of online gaming at the company.

There are more than 60 clients in Rabcat’s portfolio including some of the most reputable online casinos on the market. Among the most recent partnerships is Betzest, an online sportsbook. However, this software developer also collaborates with BetVictor, bet365, bwin, Mr Green, Paf, Tipico, Unibet and William Hill.

By covering services across two major gaming industries, Rabcat Gambling has put down roots for a bright future in the years to come. The studio’s 2D team creates anything from mood boards, illustrations, marketing assets all the way to storyboards. World creation and complete level development is provided by the 3D production, specializing in prototype building as well as animation, easily bringing client’s ideas to life.

With cinematics and co-development in its skill arsenal, Rabcat is reaching an important place in very respective fields of the iGaming industry by delivering state of the art results, year after year. It is certain that a prestigious developer such as Rabcat Gambling will undoubtedly rule the markets in the next decade and beyond.