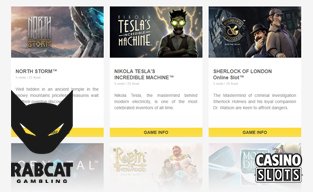 Rabcat Gambling entered the world iGaming markets in 2011 after partnering with a UK-based technology platform GTS Enhanced Gaming Engine. As a result of this relationship, the studio integrated its first slot releases such as The Legend of Olympus and Castle Builder with third-party content platforms, including Quickfire and Odobo.

Since then, Rabcat has established itself as one of the leading suppliers of the casino industry, developing game applications, video slots, card games and stunning 3D artwork based on own trademarks. Its digital content is now available with B2B platforms such as Austrian Lotteries, Microgaming, Quickfire and Yggdrasil YGS Masters.

The company’s beginnings date back to 2001, when it entered the market as a producer of the premium digital art content for the international video game vertical. After a long period of development for video game publishers such as Blizzard Entertainment, Rockstar Games and Ubisoft, Rabcat decided to transfer its outsourcing model to the iGaming industry and improve its highly skilled range of services.

Stepping into the world of video slots from Rabcat can’t be compared to other software portfolios, as each release presents a unique theme, characters and set of features, perfectly combined into a captivating story with huge winning potentials.

Starting with Castle Builder, one of the most celebrated video slots since launch back in 2014, Rabcat’s lead generation development skills continuously deliver complex and engaging stories to the screen, such as the award-winning sequel Castle Builder II, Crystal Rift, Sherlock of London, Nikola Tesla’s Incredible Machine and North Storm.

Each game is jam-packed with a fascinating set of features such as the increasing multipliers, free games, reel clones, exploding wilds, double wins and connecting wilds, while at the same time graphically superior when compared to earlier releases or other providers’ gaming suites.

Most of the supplier’s slot machines carry low-medium volatility, standard layouts with 5 reels and 3 rows and full support for desktop or mobile devices on modern web browsers.

In connection with payouts, Rabcat’s video slots aren’t really the most progressive games on the market, due to their volatility and lower multiplier options during base play. However, some releases like the North Storm online slot carry a potential win of 20,000 times bet stake. There are several symbols in the game with higher boosters for 5 same icons on a payline, and it’s pretty much the same story with Nikola Tesla’s Incredible Machine, a release from September 2019.

In short, the producer’s games stand out from the competition in terms of graphics and design rather than massive payouts. Beautifully combined with gamification elements and an engaging story, Rabcat’s games deserve a good grade on charts and it is highly likely that its trend of supreme gaming will continue in the years to come.