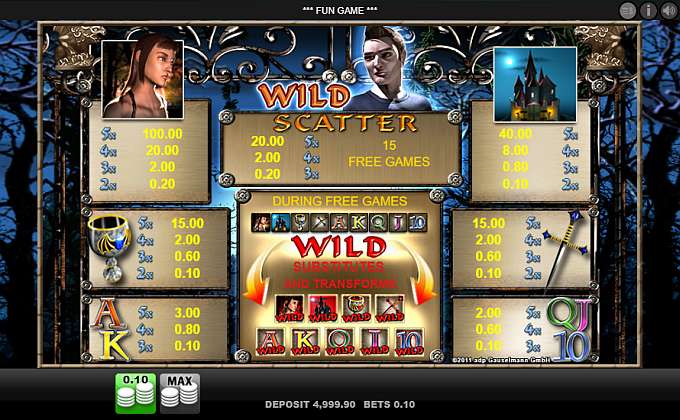 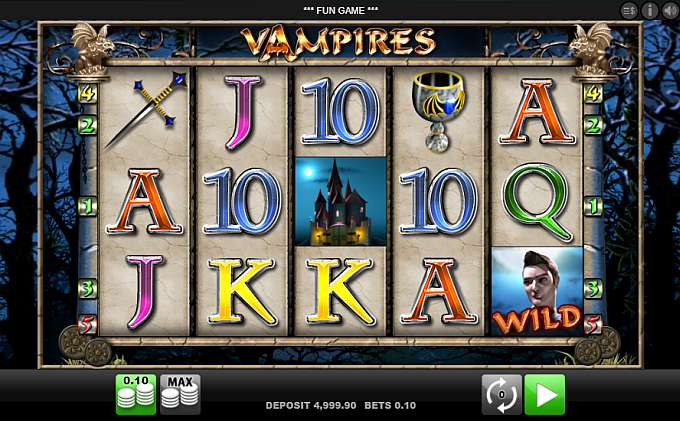 Arm yourself with garlic, holy water, crosses and maybe bring couple of stakes if you decide to walk through the dark forest and into the vampire’s castle.

The myth of the bloodsucking, forever young, pesky, creatures of the night is strong as ever. The stories of vampires have been told for centuries. They have entered our collective imagination and apparently they won’t be leaving it anytime soon.

So it’s not a surprise that in today’s day and age we spin the reels on vampire themed slots.

Merkur Gaming developed video slot called Vampires and when it comes to visuals, it’s exactly what you think – dark, gloomy, gargoyles on the top of stone pillars, dark silhouettes in the background. But it is definitely memorable. Sound is intense and it goes well with the overall atmosphere of the slot because after all vampires are intense creatures.

Vampires Slot is simple 5 reels, 3 rows video slot with 5 fixed paylines. The minimum you need to start with the spinning is 0.5 pounds and the maximum bet is 10 pounds.

When it comes to the symbols, there is a young woman, creepy castle, goblet and a dagger. These are the highest paying symbols, not counting the wild. The lower values are represented by the 10, J, Q, K and A.

The Wild and the scatter are both represented by the vampire and when he lands on the reels, he produces a chilling howl.

The free spin feature is triggered by landing three or more wilds anywhere on the reels and you will receive 15 free spins. It doesn’t matter if you win 3 or 5, the number of free spins is the same, which is a downside.

The interesting thing about this feature is that any win with wild symbol will trigger a bunch of black, scary looking bats to fly from the vampire wild and change the rest of the winning symbols into the wilds, until the last free spin is done.

So the more winning combinations you make with the wild, the more wilds you’ll have spinning on the reels, enhancing your chances of winning.

But you really need to see early wins as you only get 15 spins and the feature can be re-triggered once it has begun.

Vampires is a rather basic video slot with only one bonus feature which is not at all that surprising for a game developed by Merkur.

The animated symbols are effective; music and the colors give out the appropriate vibe. Horror and vampire fans will certainly find it entertaining. The base game pays enough to give you a decent run along and the free spins seem to be triggered reasonably frequently. You could also try some other interesting titles from Merkur Gaming.