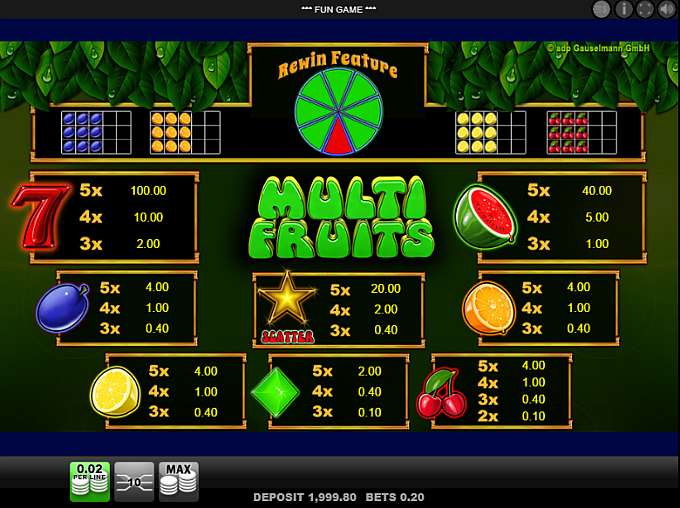 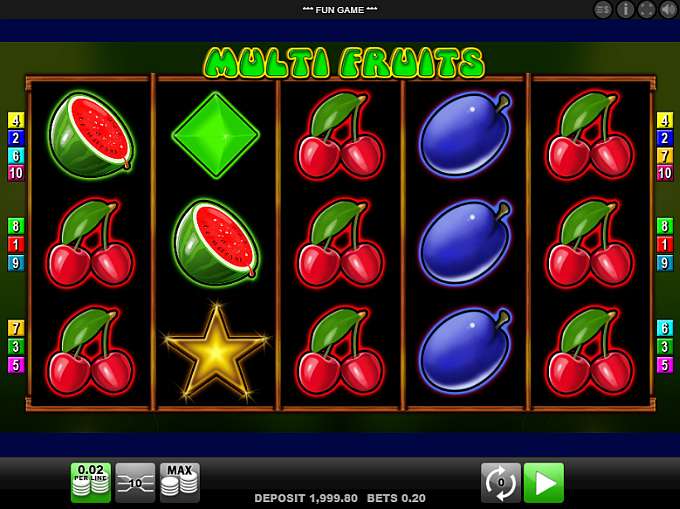 The technology is going forward fast, and although the modern video slots have come a long way from where they have started, there are still players who, from time to time, want to get a straightforward gaming experience. Those are the players who play the basic fruit – themed slots.

Merkur Gaming has a wide offering of these simple fruit machines.

…black colored reels are set against a dark green background. Most symbols follow the theme well. Wonderfully designed with vivid colors, they pop out on the dark background.

Every winning combination triggers the beautiful animations – icons start turning around and colorful fireworks can be seen.

The soundtrack is unpretentious, but it does pick up the pace and becomes more festive when the winning combos are made.

Multi Fruits is played on a 5x3 grid and has 10 pay-lines.

The lines are not fixed but you only have two options: you can either play with 5 or with 10 paylines. The winnings are counted from both sides, aka from left to right and from right to left as well.

…before you start spinning the reels, you have to set your bet. The betting range goes from 0.01 up to 4 $ per line, so if you play with maximum bet values, you’ll need 40 $ per spin.

…what about the symbols?!

Well, there are standard cherry, orange, lemon, plum and watermelon icons. The highest paying among them is the watermelon, rewarding you with 2.000 times your line bet for 5 on the line.

On the reels, you’ll also be able to see the green diamond which will get you only 100 times your bet per line but the lucky 7 is more generous. If you manage to create the winning combination of 5 lucky 7s, you will be rewarded with 5.000 times your line bet.

This title features the scatter. Represented by the Golden Star, the scatter doesn’t trigger any additional games, but it will get you 1.000 times your line bet for collecting 5 Stars on the pay-line.

Additional games are not typical for basic fruit machines, very often they don’t even have the scatter or wild symbols. But if they have some bonus feature, you can be certain it’s going to be something plain and ordinary.

The developer, in this case, decided to add The Re-win Feature.

This extra is triggered by landing the same symbol on all positions, on the reels 1, 2 and 3. After that, you are taken to the Fortune Wheel which is divided in 7 green REWIN fields and 1 STOP field. If the wheel stops on the green field…

…you’ll be rewarded with the amount of your previous win in the base game. That green field becomes red and you spin the wheel again. If it stops on the red area, this bonus round ends. The maximum number of spins is 7.

All in all, the Re-win feature makes this standard slot stand out.

When it comes to this sort of releases, players love them because they are trimmed down and you get a very basic gameplay. But, although very simple in its core, The Re-win Wheel is a great addition to the gameplay.