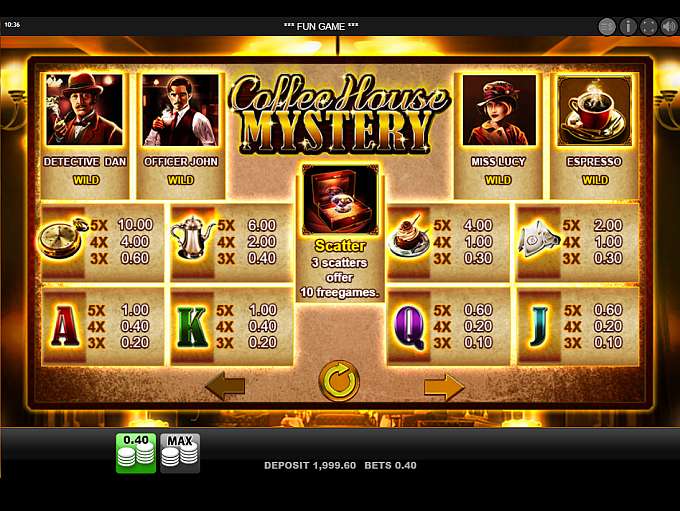 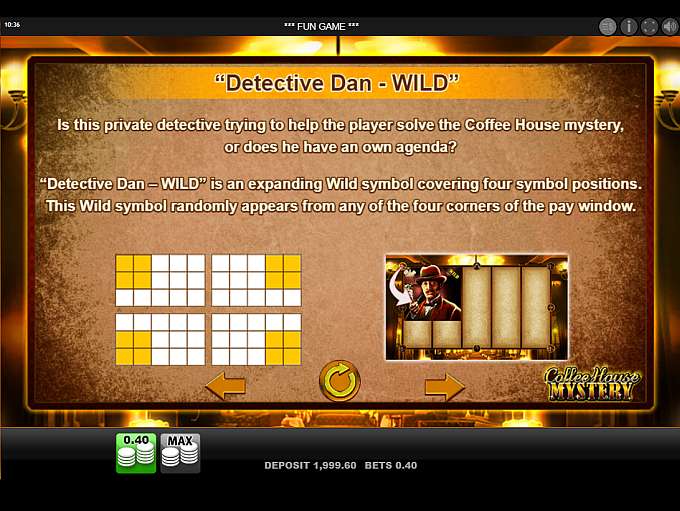 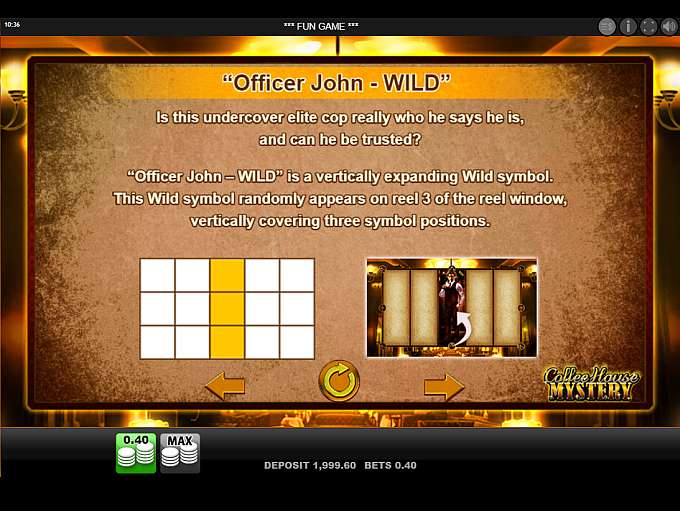 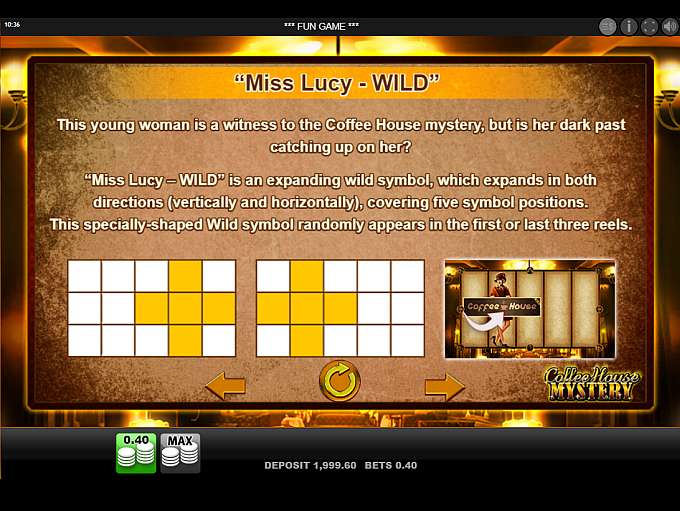 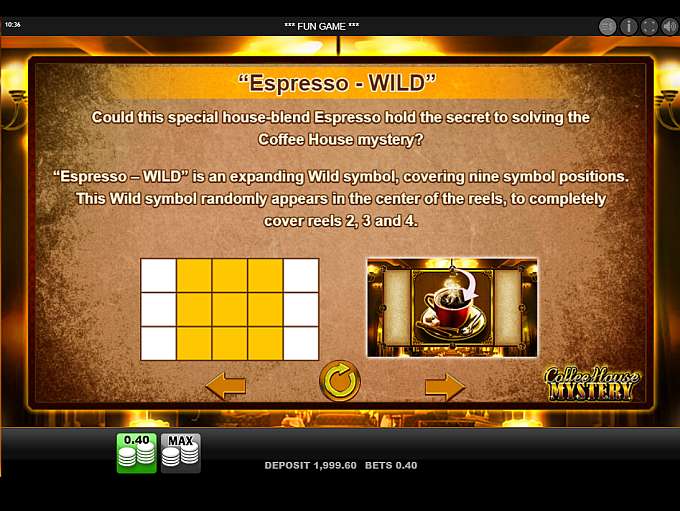 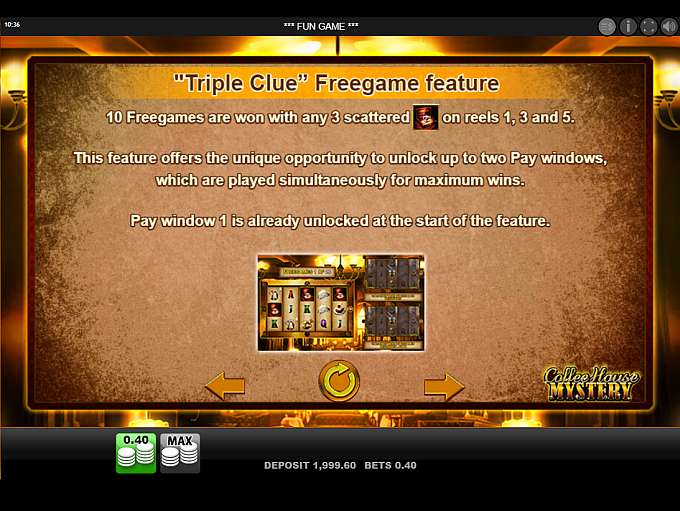 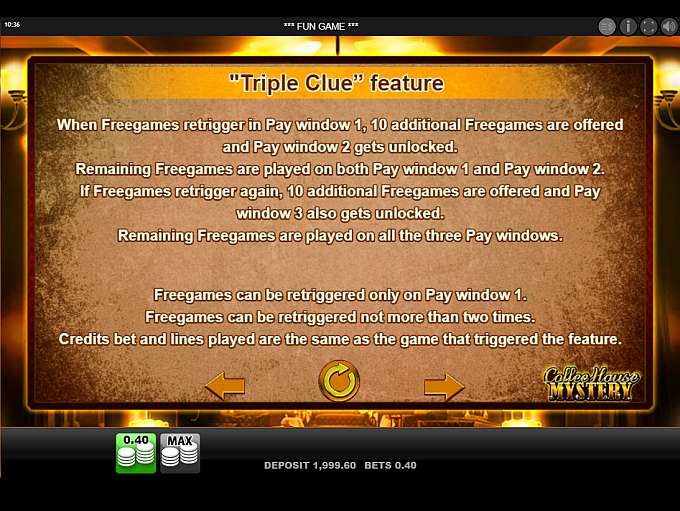 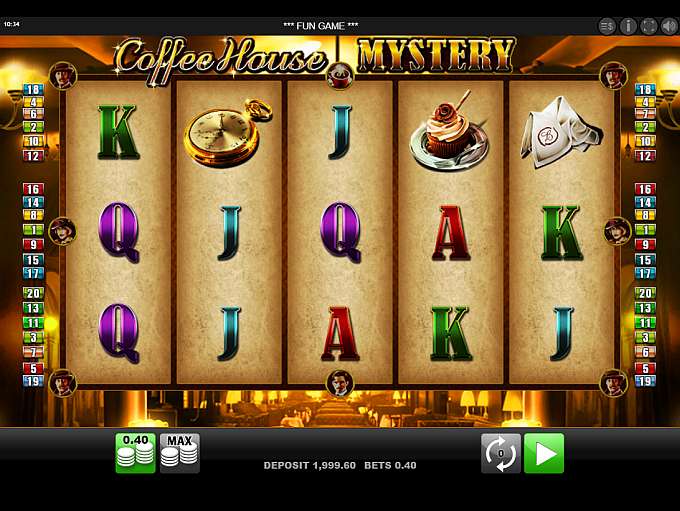 Put your detective hat on, enter the coffee house of the past era where a crime has taken place and see if you can get the right symbols to solve the case. Maybe by the end, you would prove yourself to be better than Poirot himself.

Coffee House Mystery is video slot developed by German based Merkur Gaming. The game has the classic murder mystery vibe with the soundtrack that goes perfectly with the who-done-it storyline.

Visuals are corresponding to the era when the time has taken place, with gold and brown colors dominating the screen and making it rather appealing to the players who put in long hours.

The slot has 5 reels, 3 rows and 20 fixed pay-lines. Range of the stakes goes from 0.20 to 40 $ per spin which means that high rollers won’t be as excited as those of you playing on a small budget.

When it comes to icons displayed on the reels, they also fit perfectly with the theme of the slot, so you’ll find pocket watches, coffeepots, cupcakes and napkins. Those are the high-value symbols and pocket watch is on the top of that list as the most rewarding of them all. Low value symbols include A, K, Q and J icons.

Scatter is represented by the diamond and three of them on the reels 1, 3 and 5 will trigger 10 Free Game Bonus.

There are also 4 random wilds and all of them are expanding wilds. Three of them are featuring the main characters of this story and the fourth comes in the form of the espresso coffee cup.

Detective Dan is an expanding Wild symbol which will randomly appear and cover four positions in one of the corners of the game.

Officer John is the vertically expanding Wild which also appears randomly on the reel three of the slot and is covering 3 symbol positions.

Miss Lucy is the random Wild which expands vertically and horizontally, covering five symbol positions and can appear on the first or on the last three reels.

Espresso is covering nine symbol positions on the reels. It appears randomly in the center of the slot and completely covers the reels 2, 3 and 4.

When three scatters land on the reels 1, 3 and 5, they trigger 10 Free games.

The great thing about this feature is that it offers the unique opportunity to unlock up to two Pay windows. Pay window 1 is unlocked at the start of the feature.

If the free games get retriggered, you’re offered 10 additional games and the pay windows gets unlock. The remaining games are played on both Pay windows. Important thing to know is that…

Coffee House Mystery Slot is excellent game with pleasant aesthetics and some cleverly designed features. With the variety in the Wild feature and free game feature, this is one engaging slot which has the potential of paying out some big wins.

All the fans of Sherlock Holmes and the like will certainly enjoy spinning this reels!