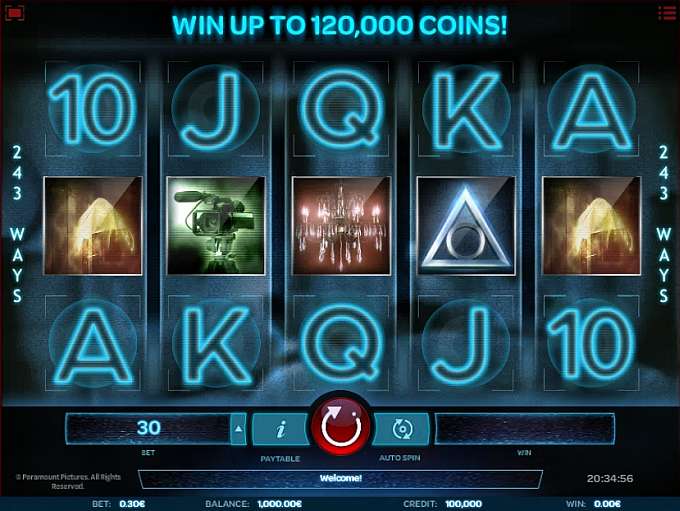 Paranormal Activity was considered to be one of the scariest movies ever released during its time, and it spawned a whole set of movies and other forms of media. iSoftBet decided to take advantage of the popularity of this brand and produce the online slot version, and they've taken a lot of care to preserve the same scary atmosphere that the movie created for its viewers. They haven't just relied on the popularity of the film, however, and they've jammed this game full of features and excellent gameplay to make it an awesome title all around.

The format of this slot is based around the 243-ways format. The idea is that there are five reel and three rows, and every paying symbol acts as a left-to-right scatter symbol. You can win by lining up one symbol in each reel, left-to-right, regardless of the position. This makes for a high hit-rate as a whole, and it helps to keep the volatility relatively low as well.

Betting is based on sets of 30 coins per spin for this game. You can pick coin values that range from $0.01 to $0.20 apiece, and this gives the game a total range for betting that starts at $0.30 per turn and goes up to $6. There isn't much of a range for super high stakes players, but that will affect a very tiny minority of those who will be interested in the game.

iSoftBet has based a lot of the features in this game around a Bonus Wheel that appears on a second screen. the idea is that you can pick up three bonus symbols at the same time on the first, third and fifth reels to trigger this wheel feature. Once you're there, it will randomly choose between a few different features for you.

The Paranormal Spins feature gives you unlimited free spins until you win five different times, and you'll get increasing multipliers the more spins you make. This is an atypical situation where losing a few times would actually be a good thing. The Possessed Spins feature gives you 10 free spins, but you get extra stacked wilds that can help you to run up some serious payouts, especially with the 243-ways format. The Demon Spins round gives players 15 free turns, and you'll get extra wilds with the random demon symbol. Finally, you can pick up instant wins multiplied by your total bet size on the wheel as well.

Wilds and the Paranormal Activity Feature

The wild symbols show up on all reels in this game, and they're the creepy looking child with the blacked out eyes. You'll get the Paranormal Activity feature from time to time randomly when a spin begins, and that will put a few extra random wilds on the screen as well, so this gives you a great addition of value as well with solid chances for multi-line wins. The wilds don't have their own payouts, but they still give players an opportunity for extra pays.

The wild doesn't substitute for the scattered hand symbol, which is unfortunately because it's the highest paying symbol in this online slot. Five anywhere on the reels pay 750x, but four earns 300x, and three picks up 90x. You don't need these symbols to be on left-to-right reels to win.

Some software providers have a bad habit of skipping on gameplay when it comes to slots that are based around movie titles because they feel like the name and popularity of the brand itself will carry the game. iSoftBet avoided this trap with Paranormal Activity, and with a ton of features that really make sense for the theme of the game, it's clear that they have taken gameplay seriously in this title.