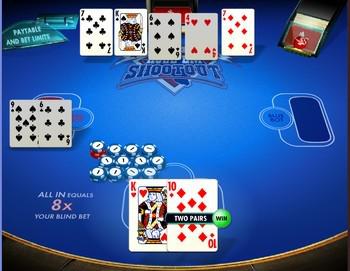 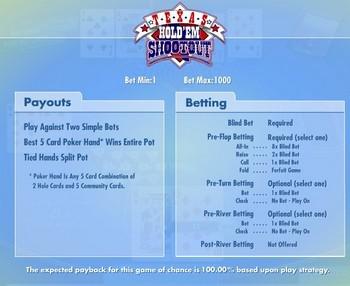 Texas Holdem Shootout Poker, a WagerWorks software online table game, is another fun and exciting Texas Holdem single-player game, with a twist! It pits you, the player, against two passive, yet simple-minded, computer opponentsa red bot and a blue bot.

The object of Texas Hold'em Shootout online poker, As with other Texas Holdem games, is for the player to form the best five card hand from two hole cards, plus five community cards dealt face up on the table. The best hand at the end of the game wins the pot without sacrificing any rake!

Texas Hold'em Shootout poker by WagerWorks have betting limits that range from 1 to 1000 credits, and an "all in" equals 8x the players blind bet if theyre feeling lucky. You also have the options of raising 2x your blind bet or 1x your blind bet if you call.

The "bot" behavior in this Texas Hold'em Shootout online poker game is never based on the value of the players cards, the players balance, the size of players blind bet, the prior outcomes, or any other external factors.

If the former occurs, such as the blue bot raises and then the red bot is guaranteed to fold the next time around; so if the player does not fold, the red bot will leave the game where just the player and blue bot will battle it out.

If both the red and blue bot have equally strong hands, one of the bots is randomly chosen. After the flop the bot left remaining will always match the players betting action, except for raising bets. So in this case, after the flop the player will control the betting. 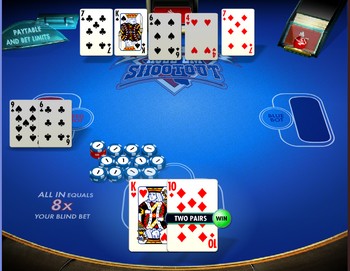