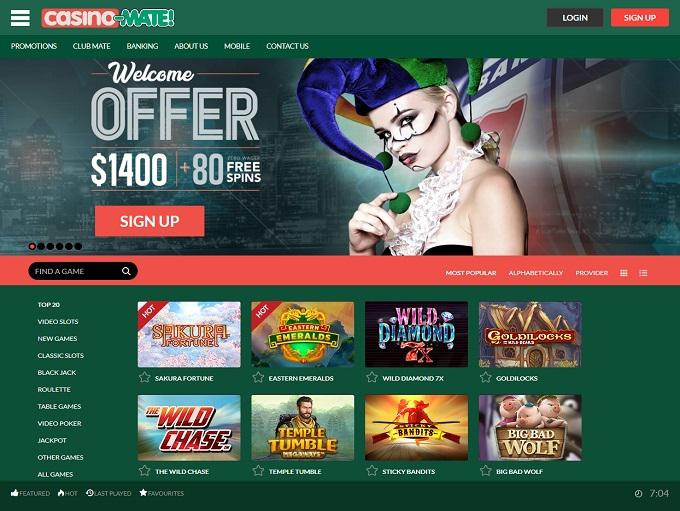 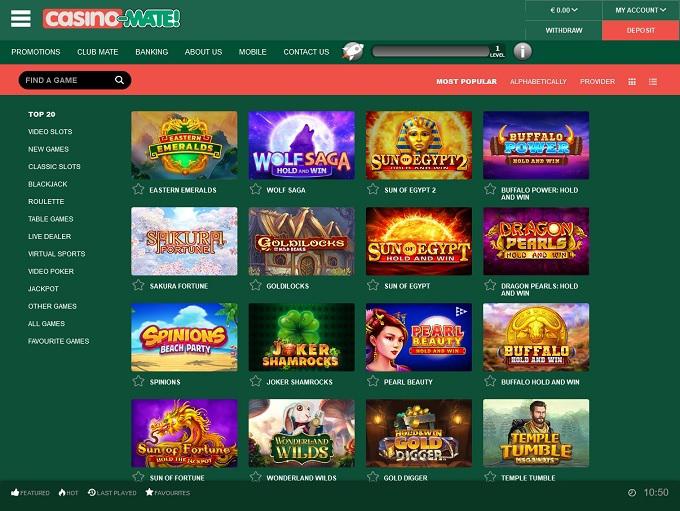 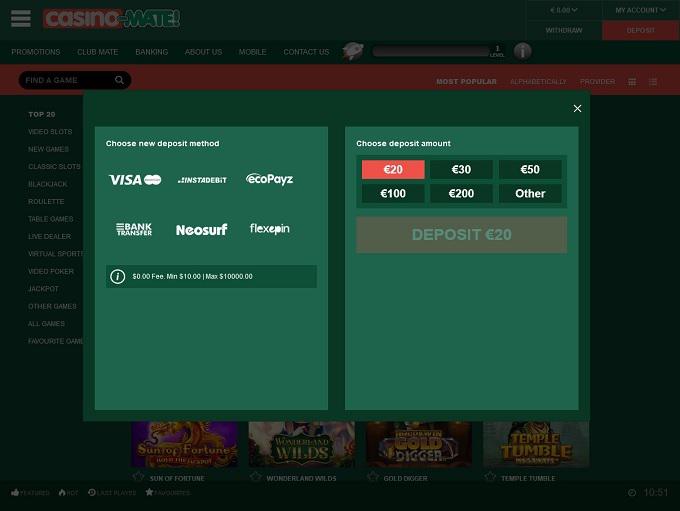 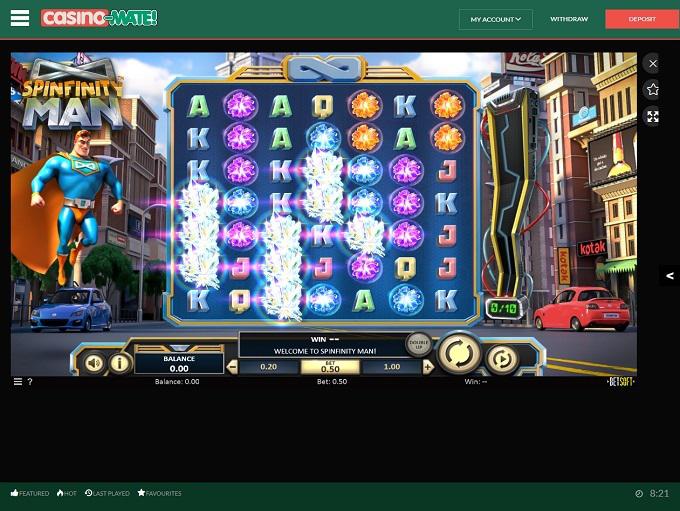 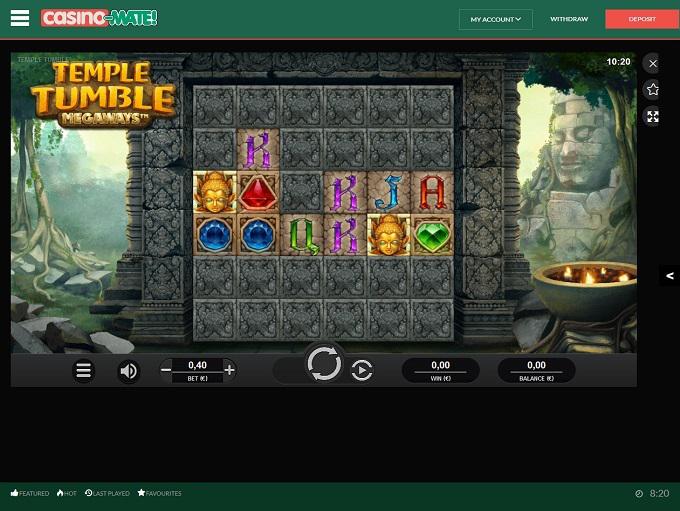 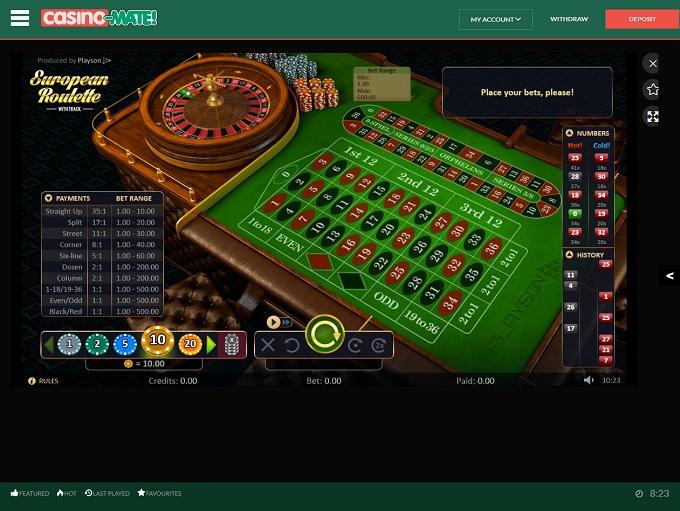 Australia is a part of the world that is known for its gambling culture, and it's where the popular term pokie originated from. Sort for poker machine, it's now known as a term for video slots, including those played online at Casino Mate. This site is licensed for operation from Malta, and they first opened their doors in 2011. In the time they've been open, they have managed to build up a good reputation, and that reputation still exists today. If you're looking for a reliable, Australian-focused site to play with, then this is definitely a solid option.

The software at this casino is provided by Microgaming's Quickfire platform. This platform is Microgaming's third in its history and its most recent. The idea behind this software is that all of their top games, including all of their most recent for the past several years, are included. On top of that, they also include a lot of games from third-party providers like Rabcat, Quickspin and others to give players a larger array of titles to choose from. Since this platform includes games from multiple providers, it also means you get lots of new titles hitting casinos every single month.

Another big perk of the Quickfire software is that it puts all titles on the same platform with an instant play/no download option. You can connect to play every single title they have available using your Internet browser, and that avoids situations where a downloadable installer would have games available that the instant play option wouldn't. On top of that, they have a great mobile platform with hundreds of games to choose from that accepts a wide variety of different smartphones and tablets.

The pokies are definitely where most Australian players will look first since a lot of players have grown up on seeing video terminals in pubs, storefronts and other venues. Their collection at Casino Mate is broken up into two main groups: five-reel video-style games and three-reel classic-style titles. The five-reel games include some major progressive jackpots like the Mega Moolah game that has broken the Guinness world record for the largest online jackpot. A few hundred different games are available, and they cover a ton of different themes with plenty of variation in how the bonus features and general gameplay work.

Aside from the collection of slots, they also have a pretty good offering of table games. Microgaming's "Gold" line of games was an attempt to set the "gold standard" in what players should expect out of table games in online casinos, and they largely achieved that goal. Roulette, craps, Baccarat, blackjack, casino poker and other titles are included in this line, and that includes multiple styles of the latter two. On top of that, players get a couple of dozen options in the video poker category, another genre that's very popular with Australian players.

As if that wasn't enough of a reason to get excited for their table game selection, they also have a live dealer section of their casino. You can choose between regular and Playboy-themed croupiers and dealers with high-definition video feeds and a chat system that allows you to talk to the other players at the table and your dealer at the same time. This creates a great atmosphere to play in, which largely matches the social aspects of playing in a land-based establishment.

The banking situation at this site is pretty solid. They have a big selection of payment methods available for both deposits and withdrawals, and on top of that, they have a really good reputation for quick and reliable cash outs that has been built up for years. MasterCard, Visa, Skrill, Neteller, WebMoney and a number of other options can be used here, though some of the availability will depend on where you're playing from. Even though this site focuses on Australian players, they have other players from across the globe.

In terms of support, this is a site that does pretty well. They have customer service agents standing by 24/7/365, so you can get assistance if you need it no matter when you're playing. Their live chat messenger system is probably the most popular option by volume, but they offer up telephone and email options as well. This means you can connect however you want to get help whenever you want, making it easy to get back to your session if problems arise.

With Casino Mate, you're getting a site that has years of experience with a well respected license running software that is considered by many to be the best platform in the world. It's hard to really find anything to complain about when it comes to this casino because they're so solid all-around. If you're looking for an Australian-themed site to play with, you'll find a good home here.