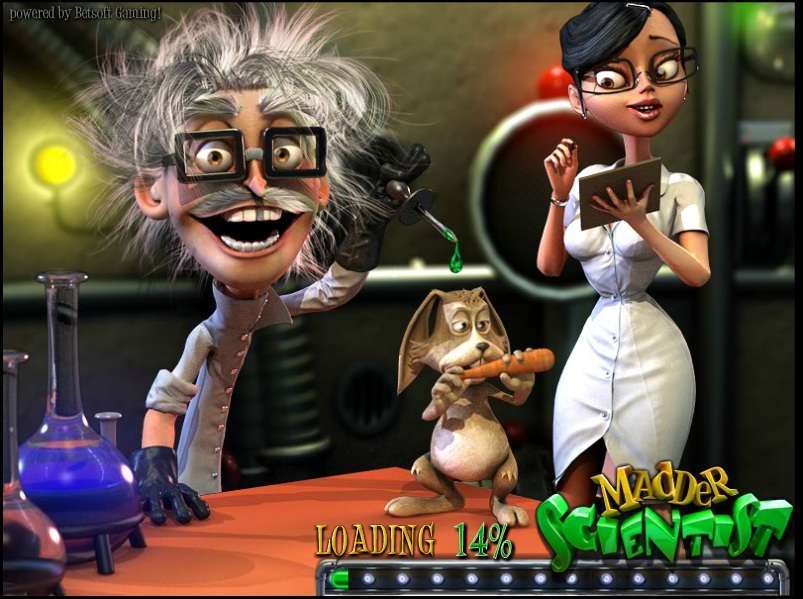 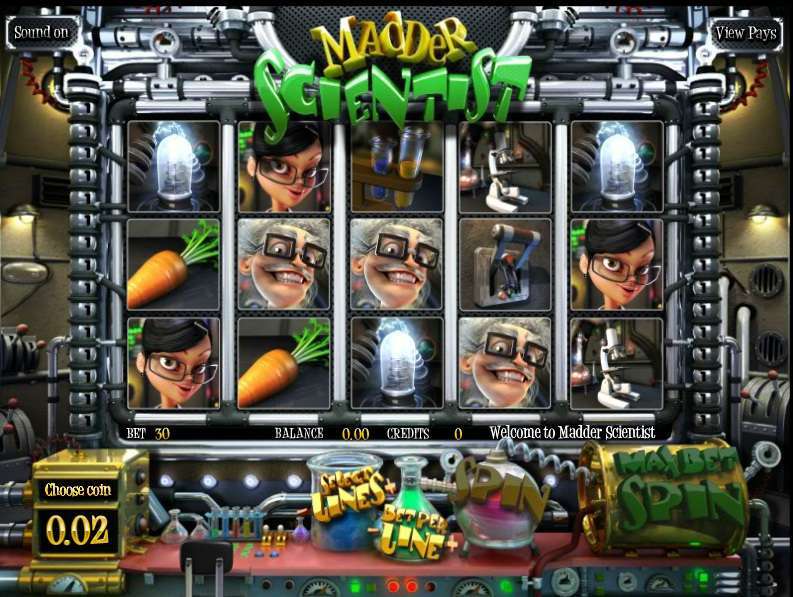 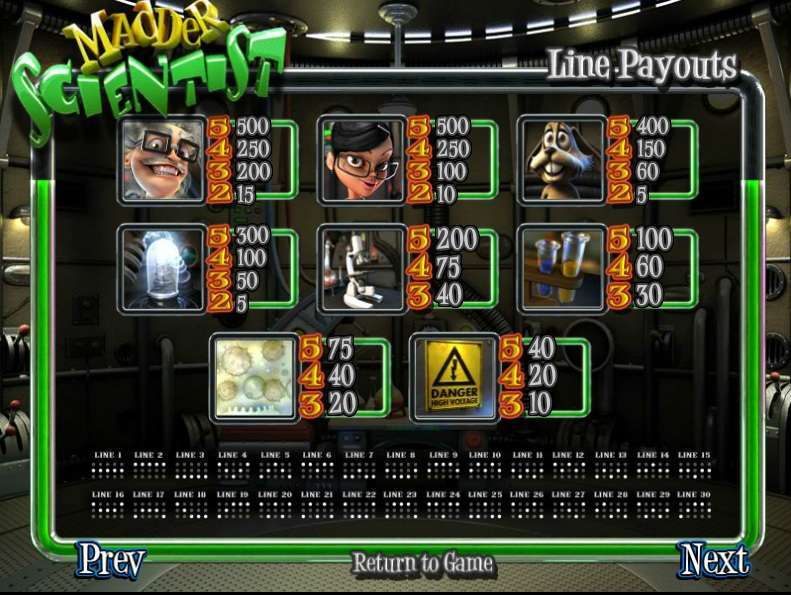 Madder Scientist slots pack even more onto a 5-reel, 30-payline 3D slot game, with a new re-spin feature, chances at wild features, Click Me bonus credits, an experimental bonus round, and high payouts!

Madder Scientist online slots could almost be considered a game of skill with all the different ways you could make your wagers and the reels work for you. The animations, of course, are pretty incredible, as are the number of ways you can play the game.

Is an experiment all its own. Choose your own magical combination of coin sizes ranging from 0.02 to 0.50 credits, bets per line of 1 to 5 coins, and number of lines played from 1 through 30; with the idea, of course, to play all 30 lines to maximize your winning potential.

With all of those factors, the Madder Scientist slots minimum max bets will be 0.60 credits and maximum, 5-coin bets will be 75.00 credits per spin. Keep in mind that your bet is tallied in number coins, not amount of wager.

The Madder Scientist online slots Pay Table is accessible through the “View Pays” link in the upper right-hand corner of the game.

You’ll see that the Mad Scientist, his lovely Assistant, and the Dog are the highest paying symbols that also award payout with as few as two coins on an active payline.

Madder Scientist slot game play goes from left to right. Expect to see the lowest-paying High Voltage symbol quite often; don’t get disgruntled, however, as even just three on a payline awards 10 coins.

The only Wild symbols in Madder Scientist online slots are featured in the Wild Switches feature (see "Switch Scatter" below).

Three Scatter symbols reign in the Madder Scientist 3D slots reels, the Beaker Scatter, the Switch Scatter and the Carrot Scatter; each activating a different bonus round (explained below).

Three or more Carrot symbols trigger the Bonus Round (see below).

The Madder Scientist Bonus Round is triggered when at least three Carrot symbols land anywhere on the reels:

After each game in Madder Scientist 3D slots, you’ll have the opportunity to re-spin any of the five reels for an extra chance to line up a winning payline. (You can't miss the pulsing “re-spin” buttons at the bottom of each reel at the conclusion of a spin).

Keep in mind that re-spins cost additional credits (a different amount on each reel, depending on its conjunction to a win), so choose your reels and your repeats wisely!

I found that this re-spin feature was the only way I could get another Carrot symbol to land on the reels to trigger the Bonus Round, but you may have better luck!

The highlight in the Re-Spin part of the game is when you hit a huge payout and cash comes flying out of the Mad Scientist’s laboratory. Makes playing this high-variance slot worth it.

Roll up your lab coat sleeves and get to work on Madder Scientist slots today!