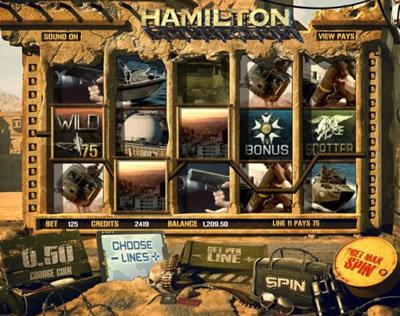 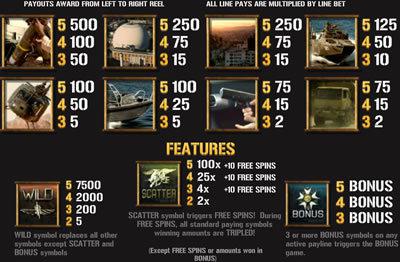 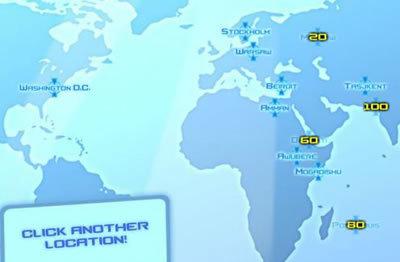 Hamilton is based on the series of spy fiction novels by Jan Guillou about Carl Hamilton, a Swedish noble turned counter intelligence.

Coin sizes are in a set range from 0.02 to 0.50 credits. You can play up to five coins per line per game. If you’ve selected all 25 lines, the betting range will run from 0.50 to 62.50 per spin. The Hamilton slot game is a Betsoft software game.

Hamilton’s short and sweet pay table cuts right to the chase. Payouts will always award from the left reel to the right reel in Hamilton slots. All of the eight non-feature symbols will need at least three symbols to award a payout. The three feature symbols are outlined in detail below.

There are two scatter symbols in Hamilton slots, and each will award payout and/or activate additional bonus rounds when three or more identical symbols land on the reels at the end of a given spin:

Are triggered when three or more “Scatter” symbols land on the reels at the end of a spin:

In my experience, the free spins feature is presented very sparingly.

Loads when three or more “Bonus” symbols land on an active payline from left to right on the reels.

In the new screen, your mission is to locate and destroy missiles that are hidden in 12 various international cities, from Kabul, to Washington D.C.:

I found that the cities could include anywhere from 25 to 500 missiles, so this bonus game has the potential to give your account quite a swing.

There are only two drawbacks to Hamilton slots: one is the lack of an autoplay feature, and the other is the high variance play.

Since most symbols need three symbols and since the bonus game can only be triggered on an active payline, this game can go several plays without a win, despite the ample presence of wilds. If a slots player is patient, though, the big pays are out there.

Play Hamilton online slots to stop the missiles in its bonus game, and get paid extra coins for the effort! 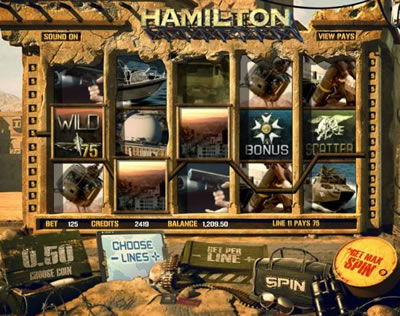