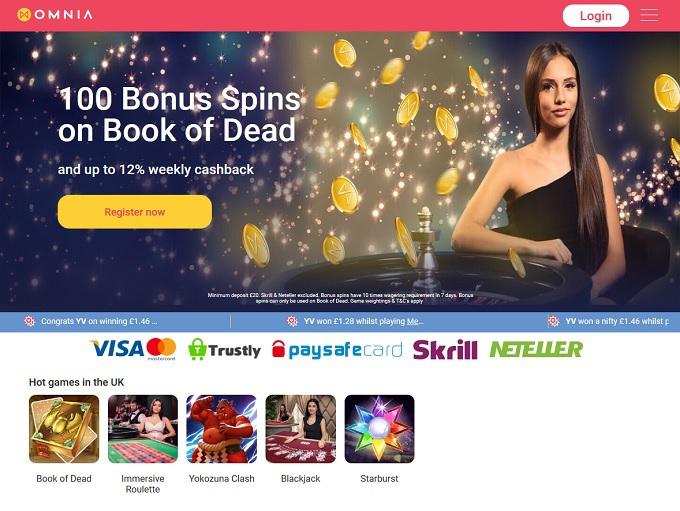 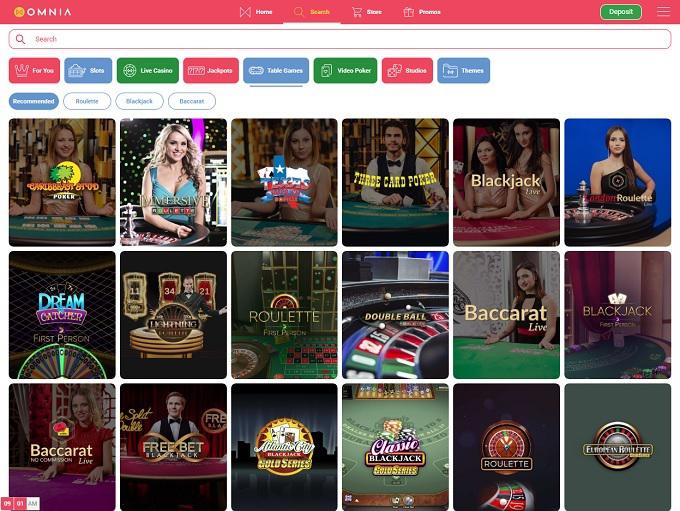 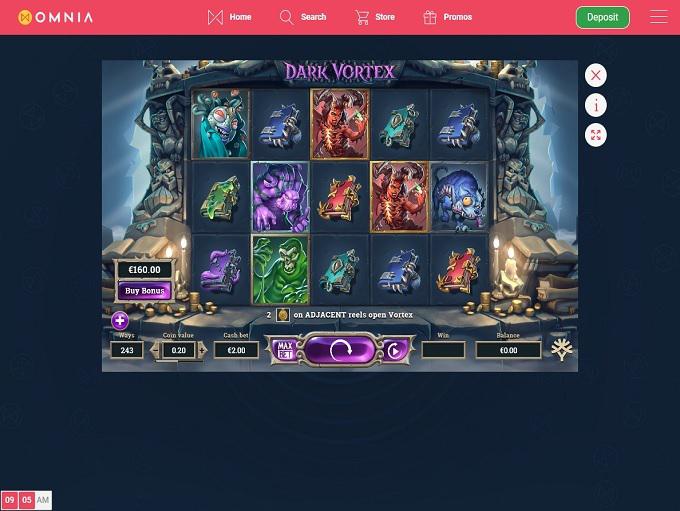 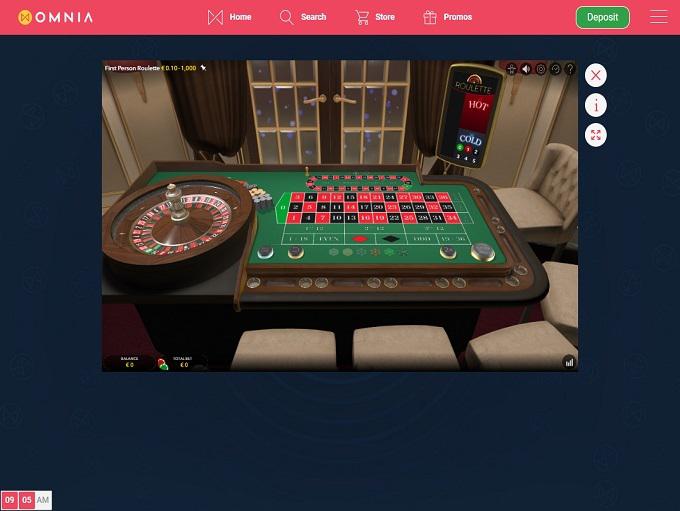 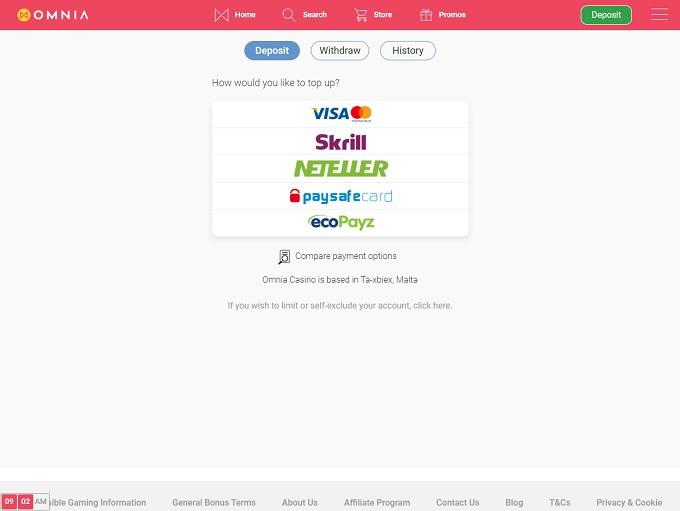 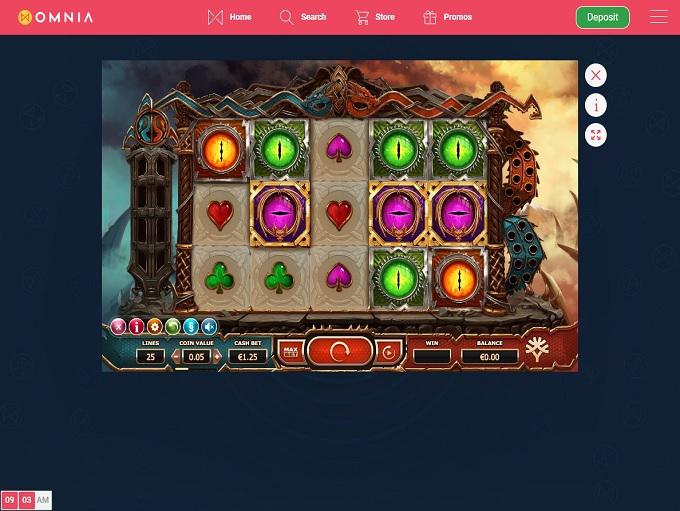 Something that's really great about the state of the modern online casino industry is that it puts players in a position where they have a really wide variety of different options available for where to play. Omnia Casino is yet another good choice, and they've had their doors open since 2017. They're operated by MT SecureTrade Limited, a company with a tremendous reputation, and they have licenses in both Malta and the United Kingdom, which are considered the two most reputable jurisdictions.

There are a ton of different software companies that have contributed games to this site, but it's largely based around the Microgaming Quickfire platform. This platform includes lots of third-party titles from companies like Play'n Go, NextGen, Quickspin, Yggdrasil, Red Tiger Gaming, Pragmatic Play and plenty of others.

Along with that, you get the full suite of games from NetEnt, BetSoft and Evolution Gaming, which includes plenty of live dealer games as well for players who want to get in on that particular type of action.

To get started playing is pretty easy since there's no download required. The casino runs in your web browser on Linux, Mac or Windows-based computers, and as long as your browser is updated, and you have an Internet connection, there will be no problem getting started playing in a matter of moments.

Mobile players can sign in and play without having to download any apps as well just by using your mobile browser. The games play in a full screen mode to make the most of the smaller screens, and the controls are designed to scale in a way that makes it easy to play without feeling like you're trying to push tiny buttons.

Slots make up the majority of what you're going to find here in terms of overall game selection, but that's the case pretty much anywhere you play online or in brick and mortar locations.

The most notable titles include the big progressives, of which Mega Moolah from Microgaming and Mega Fortune from Net Entertainment probably get the most attention because they've each held the world record for the largest online payouts in history.

Aside from that, you'll find tons of games in different genres and sub-genres with a lot of different graphical styles, themes, play styles and feature sets.

The table games selection gives players a full array of blackjack, video poker, Baccarat, craps, roulette, table poker and other options to pick from. This is in addition to the variety of live dealer games available from Evolution Gaming, which is generally considered to be the best live dealer software provider in the entire online casino industry. You can feel like you're in the middle of the action with a very social atmosphere, which is about as close as you can get to being in a land-based casino environment without actually traveling to one.

A variety of options for deposits and withdrawals make it easy to have primary and secondary choices lined up for your transactions. This list includes Maestro, Mastercard, Visa, Neteller, Trustly, InstaDebit, iDEAL, Euteller, GiroPay, Pay N Play, Skrill and a bunch of others.

Additionally, you can trust that you'll get your cash outs quickly and reliably thanks to the history that the operating company has and the fact that they have licenses in both Malta and the UK.

What is Pay N Play?

This site has an instant payment option called Pay N Play that's set up through Trustly. This allows a very quick registration process combined with a first deposit to make it easy to get started playing. While this option is only available for players in select countries, including Sweden and Finland, it's very convenient if it's available to you.

From a site licensed in the two most reputable jurisdictions, you expect good customer service, and that's exactly what you'll get from their support team here. Live chat and email options are always available, but there is no telephone option. Most players won't mind that since the other two choices are available for 24/7/365 support.

We'd like to note that we recommend that players only use the email option for things that aren't particularly urgent. If you have something that needs to be addressed right away, then we suggest you use the live chat messenger system instead.

Omnia Casino is bringing a lot to the table, and it's hard to deny that once you look at the overall picture. They are very solid on every level that you could measure for an online casino site, and that starts with their tremendous reliability and extends through their extensive game selection.

We have found no real negatives of playing here if you live in a country where they are available. Even though they haven't been around as long as some of the competition, their parent company has been around for a pretty significant period of time and has always taken care of players.