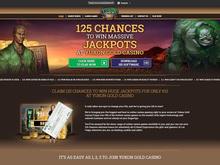 Yukon Gold Casino is one of the older Microgaming-powered casinos that still uses the older Viper software instead of the Quickfire platform. This puts them in a class of elite veteran sites, which is no surprise since they've been running since they first opened more than a decade ago in 2004. They have their license to operate from Kahnawake, but they also have the eCOGRA Safe & Fair Seal, the single most important certification that an online casino site can earn. This shows that they have a higher standard for business practices and how they handle their players, and their long time in the industry paired with an excellent reputation over that time shows that they can be trusted.

As we mentioned above, this online casino uses the Microgaming Viper software package. This means that you'll get access to virtually every single title ever created by Microgaming since they first opened their doors in the mid-1990s. Since their games cover a span of more than two decades, some of their titles are a bit dated, but because they have more titles than any other individual developer out there in the history of the industry, you'll never have to worry about running out of titles to play. What's more is that all of their newer titles over the past several years are up there in quality with the best in the industry, so they have you covered on both the quality and quantity sides of things.

In terms of how you can connect to play, they have downloadable and instant play/no download, browser-based options available. There is no native app or dedicated mobile option available here, but you can connect through your smartphone or tablet to the instant play version of the casino if you like. It doesn't matter what type of phone you have or what operating system you use on your mobile device as long as you have a browser and a connection.

There are a few hundred online slots available at Yukon Gold Casino thanks to the Microgaming Viper software. This is the bulk of their game selection, and it covers virtually every type of slot you could imagine. Every type of feature, every game format (classic, video, other) and every level of volatility can be found in this enormous collection of games. This selection includes some pretty huge progressives as well, including the Mega Moolah progressive that broke the world record and that holds several spots on the top 10 largest online jackpots of all time.

You'll get tons of games with different themes as well. This includes Microgaming-specific, in-house themes like the Avalon and Thunderstruck series as well as games based on popular brands from television, movies and other forms of media like Jurassic Park and Game of Thrones.

In terms of table games, Microgaming has a significant amount of depth in virtually every genre. This includes craps, roulette, Baccarat, casino poker and others. Their blackjack and video poker selections are especially deep with over a dozen variations or so of each in a variety of styles. Each of these two genres include games with payout rates of over 99.5 percent with correct play, so there's obviously some room for big payouts with these games if you know what you're doing.

Although keno, scratch cards and instant win games aren't considered table games, they are still non-slot titles, and there are plenty of those to choose from as well. Many of the themes are based on popular brands from other types of media as well, and this adds quite a bit to the excitement.

Yukon Gold Casino has a tremendous reputation for paying out quickly and reliably. This reputation spans more than a decade, and they have no cases of scandals or non-payment for unjustified reasons. This gives players serious peace of mind in knowing that their funds are safe here.

In terms of banking options, you'll have popular credit cards like MasterCard, Visa, Solo and Maestro to choose from. They also have a huge selection of electronic methods open like Skrill, Neteller, EcoPayz, Postepay and several others. There are well over two dozen different payment options here, but a lot of them will be restricted based on where you live. Regardless, this is a huge number of choices, and it virtually guarantees that you'll have no problem finding a banking option that works for you.

This site has been around long enough to know that customer service is critical, and they provide excellent support as a result. They have a live chat option that's available 24/7/365 as well as an email option that gives you fairly quick and friendly replies. There are more than five different telephone options for Denmark, Canada, the United Kingdom, Italy, Germany and other locations, though they aren't always open 24/7. Instead, they're open for the normal hours that speakers of those languages will tend to be playing.

The key thing to understand about Yukon Gold Casino is that it has been around longer than most of the competition, and they have taken full advantage of that time in the industry. Along these lines, they have stuck with the Microgaming Viper software in an era where so many other sites use the Microgaming Quickfire platform instead. While you get a ton of games either way, you miss out on the wider range of styles of games that come from the Quickfire platform, which includes a lot of titles from third-party developers. The flip side of this is that Quickfire doesn't have the entire Microgaming library.

As a result, there are pros and cons to playing with each platform. While you can find reputable sites that use the Quickfire software and that are eCOGRA software, you'll have a hard time finding one that used Quickfire and has the reputation of Yukon Gold over a comparable amount of time.